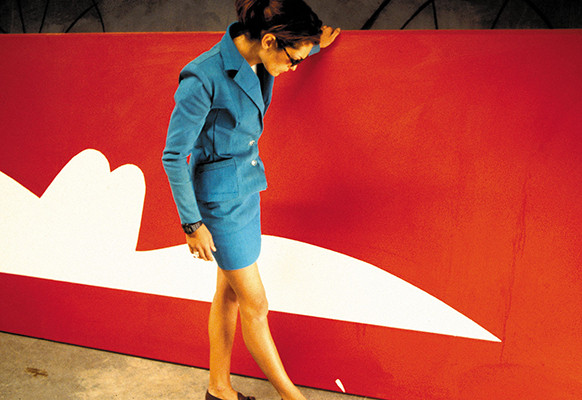 The film is a collection and synthesis of some of the concerns I have been involved with over the last 10 years. Social positioning, posturing, non-verbal communication, the gesture, architecture, it is a glass work not class work, glass being the Mise en Scene, starting point being a glasshouse piece ‘People who make Art in Glasshouses 1969’ ending in a Think Tank in The Tate.

It is eclectic and appropriates everything, and everyone necessary, similar to a retrospective at The Tate 1972 ‘King for a Day’. It is an open system, every part, every move, every scene, every colour, every gesture, every word constructed, no gratuitous imagery or verbal postures or actions. It is didactic, informative, explanatory, using real language borrowed, commentary stolen, real people, real places, filmed in reverse, sideways, out of focus, upside down, joking about situations, the situations themselves jokes made clearer, this is a comedy, a tragedy, a prediction, a political film, an art film, a sex film, probably the first architectural movie, (real issues will be discussed seriously).

It will be seamlessly constructed, visually stunning, working on many levels, it is a moving picture and will position moving pictures in a fine art context alongside oil on linen, bronze on marble, white on white, black on black, because of the subject matter, the picture will be accessible to all, even though this is the first real art movie. Text, comment, subtitling, titling, visual and verbal interpretations, mis-interpretations, mistakes intentional, casual tat, constructed chaos will be visible in, on and around the moving images and will affect radically, the actions, moves, in the film. The work has plot, sub-plots interwoven into the structure, e.g. the cultural war, fought and won, the decimation of Britain as a cultural force/farce will be demonstrated visually and orally, predictions for future methods of government will be presented, reviewed etc. At the same time the work concentrates on three styles of headwear (male), the Bowler, the Stetson and the Homberg, (A vertical Beret and Spanish Sombrero may be included). It will be perhaps the first real hat movie.

Over the past 50 years, Bruce McLean has wryly and intelligently poked fun at the institutions of art from within. McLean's radical conceptual practice – beginning with his days as a rebellious student at Central Saint Martins and stretching to the present – has touched nearly every medium, including those coined by the artist himself like 'pose-work'. His work has been exhibited in seminal exhibitions including 'When Attitudes Become Form' at the Kunsthalle Bern, 1969; 'Zeitgeist' at the Martin Gropius Bau, Berlin, 1982; and three installments of documenta (1977, 1982 and 1987). Last year McLean was the subject of a major retrospective at firstsite, Colchester, which will travel to the Arnolfini Center for Contemporary Arts, Bristol and the Gallery of Modern Art, Glasgow in 2016.
www.tanyaleighton.com