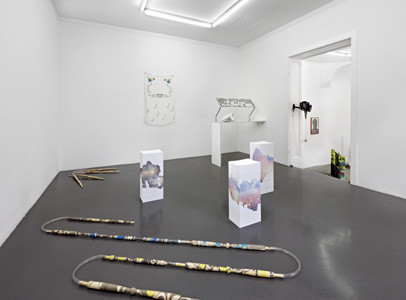 As many of Berlin’s galleries squeeze in one last innocuous exhibition before breaking for the summer, Tanya Leighton Gallery proudly presents a show that re-strategies the principle elements of a gallery ‘group show’. GROUPED SHOW aims to re-examine the ‘exhibition model’ by inviting participating artists to ‘curate’ their works into the exhibition; placing them in the driver's seat in disseminating a curator's ideas. Encouraged to treat their work less as artworks and more as objects used to decorate a space, the artists have worked together to place their work atop of, directly aside, or obtrusively in front of one another. Negating the polite, respectful nature that typically dictates group show exhibition design, these 'object hybrids' confront how the status quo methodology for curating group exhibitions (via fixed positions in physical display) is confronted by near-instantaneous peer-to-peer sharing of image, text, media and knowledge content between artists.

Aleksandra Domanovic (born 1981 in Novi Sad, former Yugoslavia) lives and works in Berlin. Her work focuses on profound social and media-technological transformations, and their interdependence. Some of her projects give form to the relationships of meaning imposed by archival models. Others suggest alternate models that draw on her observations of shared memory and feelings of community. Domanovic uses material related to her autobiography -- the television, music, and monumental art of Yugoslavia -- as well as materials that claim transcendence of the personal and national, such as Getty Images' database of stock photography and (on the blog Vvork, which she co-edits) international contemporary art production. In the difference between these categories of sources, one finds the concern central to Domanovic`s work: individual subjectivity and how it is subsumed, erased, and distorted by attempts to attain universality. Recent exhibitions include based in Berlin, n.b.k., Berlin (2011); Imagine being here now, The 6th Momentum Biennial, Moss, Norway (2011); Shanzai Turbo, Western Front, Vancouver (2010); Free, New Museum, New York (2010); ‘A Painting Show’ (2011), Autocenter, Berlin; Turbo Props, The Institute of Social Hypocrisy, Paris (2010) and Surfing Club (2010), Plug.in, Basel. She is currently in residency at Künstlerhaus Bethanien in Berlin and is a co-founder of the VVORK platform (www.vvork.com).

Yngve Holen (born 1982 in Braunschweig, Germany) lives and works in Berlin. Recent solo exhibitions include TruEYE surView, W139, Amsterdam (2011); Parasagittal Brain, Johan Berggren Gallery, Malmö (2011); Half Asleep to the 2010 Hot One Thousand and One, Neue Alte Brücke, Frankfurt am Main (2010). Selected group exhibitions include based in Berlin, Kunst-Werke, Berlin (2011); Approximately Infinite Universe, New Jerseyy, Basel (2008). He recently co-curated the exhibition The Smart Frrridge (Kunstverein Medienturm, Graz, 2011) and is the co-initiator of the web-based publisher XYM and co-organizer of the club BODY XEROX.

Marlie Mul’s (born 1980 in Utrecht, The Netherlands) practice deals with the conceptions that lie behind such terms as ‘making’, ‘process’ or ‘innovation’, to thereby pose questions in relation to skill and autonomy in artistic production. By doing so, she addresses art in relation to value, art as the production of production itself, or art in the prevalent situation wherein time spent on making is a non-value. She is a graduate of the Architectural Association’s MA in Architectural Theory, and Fine Arts Department of the Academy of Fine arts in Maastricht, the Netherlands. She is co-initiator of the online artists PDF publishing platform www.xym.no and teaches at the Architectural Association in London. Recent exhibitions are the solo exhibition Your Wet Sleeve in My Neck at Galerie Lucile Corty in Paris (2011), and the group exhibitions The Smart Frrridge (Chilly Forecast for Internet Fridge) at Kunstverein Medienturm in Graz (2011), Rhododendron at W139 in Amsterdam (2010), and Benedictions at Limoncello in London (2011).

Timur Si-Qin (born 1984 in Berlin) is an artist of German and Mongolian-Chinese decent who grew up in Berlin, Beijing and the American Southwest, and currently lives and works in Berlin. His work emphasizes the nature of the synthetic, focusing on the materiality of globalized and networked society, often times blending the virtual with the actual in an effort to highlight the heterogeneous, distributed space of our mass-mediated ecology. Recent exhibitions include based in Berlin, Berlin (2011; Not to be confused with..., Von Cirne, Cologne (2011); Post Internet Survival Guide, Future Gallery/Gentili Apri, Berlin (2011); 爷爷 Aspects of the universe search and sorting computer, Société, Berlin (2010) and État de choses, Darsa Comfort, Zurich (2010).
www.tanyaleighton.com