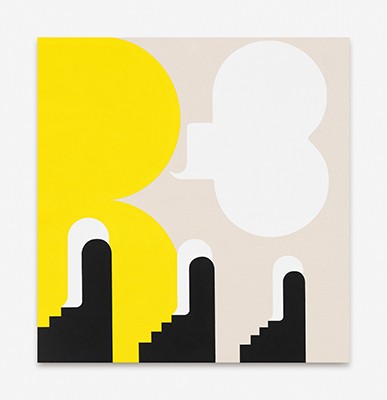 This time, it was a speech bubble. With each new set of her "NEWZ!" paintings, I like to study the one or few new forms that emerge have always been there. She found a speech bubble revealed its absence by carving the shape of doorway from that of a bone.

Math Bass has built unraveled the "NEWZ!" series by making a grammar out of negative space. Often, forms emerge not through their presence but rather through what's withdrawn from view. I try to follow backtrack from A to B to Z. Math told me the quotation mark she uses came from is just the nostril of her often-featured alligator. (You won't find the quote in this show, but you'll get the gator's jaws). From nostril to quotation mark, a shape becomes another by not changing at all. Here,a cavity becomes language words congeal around a void.

The operation making sense out of absence makes me think about all the visceral abstractions I wade through: like gender, like value. How they work by circulation and repetition, like a kingdom of dominoes. How they concretize bodies like concrete poured in jeans by evacuating meaning like limp canvas sleeves. What is gender, what is value, besides an appearance of coherence after the fact of fabrication? And from Rob Halpern what is a body besides "a hole around which everything that appears, appears to cohere"?

I think about all the visceralabstractions wrapped around me: like value, like gender granddiscourses of cash and cum. How being abstract doesn't make them any less real ly able to immiserate and kill. How they take their place among our many integuments- not just the rind, but the pith, not just the pith, but the membrane around each bit of pulp. How we grow into their architectures stretched canvas gym mat, or their folds the way unsewn hems appear to have been flayed, or need them to prop ourselves up on this is the staircase's teeth. Meanwhile, the metaphors of condensation and coagulation are all I Sianne Ngai have left to describe their work shrines to an aftermath presented as the present.

Playing dumb Los Angeles artist I watch turn my head as one object becomes another by not changing at all from N to W to Z (!). The grammar of negative space manages to articulate difference out of more of the same. How can language stand in for what's unsaid? Maybe negative space is another way of referring to tone: the work the body does around the words. Maybe negative space is the body itself a hole, a void, a wound defined by its vulnerability to penetration, definition. Maybe these speech bubbles aren't speech bubbles after all, but rather a kind of catachresis for the loss that speechlessness itself can't articulate, or the hollow in the marrow. In dominoes, a single tile is called a bone.

Math Bass (b. 1981, New York), lives and works in Los Angeles. She received a BA from Hampshire College, Amherst in 2003 and an MFA from University of California, Los Angeles in 2011. Bass began her career primarily as a performance artist, but has since expanded her practice to include painting, sculpture, and video. In 2015, MoMA PS1 presented the inaugural solo museum exhibition of Math Bass in the United States (curated by Mia Locks). This summer the Yuz Museum in Shanghai hosted her first solo exhibition in China. Her work has been written about in publications such as Artforum, Art in American, ArtReview, Frieze, Modern Painters, X-TRA, and 'The Uncertain States of America Reader', published by Sternberg Press in 2008.
www.tanyaleighton.com