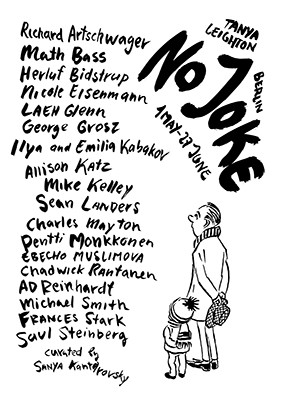 It takes a degree of solipsism to be an artist. We gallerists, critics, and audience members frequently talk about an artist's vision - as if looking at an artwork could somehow be tantamount to slipping on a pair of glasses that let us see through the artist's eyes. We talk about getting lost in paintings, enveloping ourselves in a version of the world imagined by our society's arbiters of vision. No Joke assembles artworks that stare back at their viewer, making light of their own conception and creation, and reminding the public of the ways in which they are consumed, fetishised, and traded. A tragicomic self-reflexivity is the unifying quality in all of the artworks on display.

It goes without saying that when we look at artworks we engage with them via a set of preconceptions that have been, whether knowingly or not, drummed into our minds. Art has languages that can be learned like any other. Luckily these can be punned around with, purposely misspoken and used for misdirection, creating humour through the incongruity between our expectations and what's actually being shown to us. Or said to us: here a landscape painting brims with nihilistic missives and abstract paintings pose existential questions to their audience.

No Joke brings together artworks that self-deprecate, that question the purpose of artists and art alike, but, simultaneously, they make sure not to spare any onlookers.