Nothing Will Be As Before 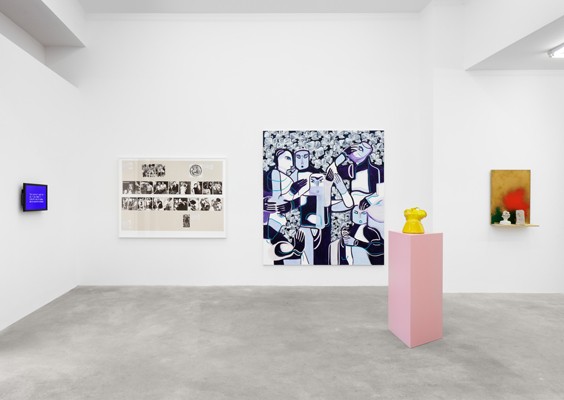 “Nothing will be as before” declared the invitation card for the first exhibition in Tanya Leighton Gallery, a solo show by Sharon Hayes titled In the Near Future, which opened on July 4th 2008. A 9 slide-projector installation (now in the collection of the Guggenheim Museum in New York) was shown in the strangely shaped rooms of the ground floor, streetcorner space on Kürfurstenstrasse. Now, 10 years later, in these same rooms, as well as the pendant space across the road that opened in 2015, this statement proves prophetic. Nothing is as before – from the turbo-gentrification of this historically chaotic neighbourhood, to this sprawling assemblage of an exhibition that marks ten continuous years of exhibition-making and learning-by-doing.

The gallery opened with a tightly conceptual remit, rooted in Tanya Leighton’s experiences as a curator in Glasgow, New York and Philadelphia, working with American and British experimental cinema, artist’s film and video, performance, minimal and conceptual art. A central aim was to make visible or re-position marginalised or under-acknowledged artists, such as experimental filmmaker John Smith, the early sculpture of Bruce McLean, or the little known Chinese-American painter David Diao. Though this remains central (as a recent show of the extraordinary work of German artist Marianne Wex from the 1970s shows), the past decade has seen the gallery programme spiraling out in unexpected directions. At best, a gallery is a breathing, responsive organism, and over the years, the boundaries of Tanya Leighton’s gallery expanded and shifted to accommodate unexpected discoveries, recommendations from trusted artists, along with the constant negotiations of keeping a business afloat amidst the blunt realities and unglamorous obstacles of the art market.

This exhibition is a generous demonstration of the gallery’s osmotic principles, as a system which connects on many different levels and with varying degrees of formality. There are works by artists in the gallery’s programme, along with others by artists who have shown in group shows over the years, as well artists who happen to work nearby and are regular visitors, and even new works by artists once represented by the gallery who no longer are. Its jumbled contents are the social relations of the art business made manifest: a messy, extended family of sorts.

In the end – beyond owner, staff, and space – a gallery is the art that it shows, and the core decision of what to show and who to work with is always a leap of faith. There is no knowing how things will evolve, how the delicate relationships between artist and gallery will develop, what the work will become over time. A double-digit anniversary is not only an opportunity to clear the basement from 10 years of accumulated junk, it is a celebration of these relationships and of the gallery’s role as a framework, an interface and an arena for conversation.

Amongst the cacophony of this concept-free show, surprising connections emerge between the works that describe threads of a common sensibility, or unexpected affinities. A summation of ten years, it is a curious and fascinating marker of time. Indeed, Nothing is as before, and will continue not to be so. - Kirsty Bell
www.tanyaleighton.com