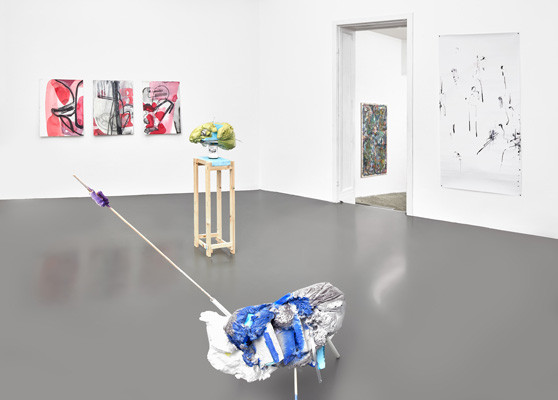 To declare nothing matters, existence is absurd, life is a tawdry joke has an old-fashioned ring to it. Another Manhattan please. The untimeliness of such propositions is out of joint with the fashionable cynicism of a time that prefers its nihilism neatly packaged, its concepts ready-to-go and its formalism machine hewn. Nevertheless there is always room for the frayed-edge, a word gently slurred and an artistic countenance that assumes the meaninglessness of all endeavors with the stone-faced mastery of a Buster Keaton.

These works, like all works after all, declare their preferences and they prefer their form dissolute. All the better to align the imagination with those rare moments when the mind's craving for order is given a reprieve. Form, yes, but not formality. That is to say, form that remains imperiled, irresolute, negative. Negativism need not be bound to a willful negation (the perennial thumb in the eye). There are other ways of declaring one's suspicion concerning the mind's signifying habits. To dissipate, to impoverish: actions that deform a given. To work with one's mud, the psychic sink of the idea. Ideas need not simply prop the work up as the palm of the hand supports the thinking man's chin. The idea can enter into the work's tissue, its meat and we've worked hard to think with the full weight of the eye-ball — that bit of flesh that punctuates consciousness' relation to the visual field.

Indifferent to the directives of the index finger and the imperium it prescribes, these works evidence the collapse of cognition without suffering therefrom. Eloquently awkward, the works seem to say: signification is not the last word on the visible.
www.tanyaleighton.com