In fifteen minutes everybody will be famous-Tape Modern No.15 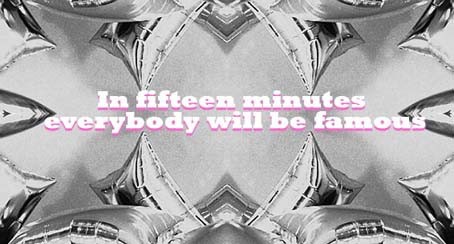 In fifteen minutes everybody will be famous-Tape Modern No.15
Special event for gallery weekend!
Curated by Anna Erickson and Emilie Trice

Please take notice that the exhibition will take place in the hall next to our usual space and entry is free all night!

In cooperation with Heidestrasse galleries and Halle am Wasser openings.


The exhibition In fifteen minutes everybody will be famous brings together 22 international artists whose work refers either to Warhol’s signature Pop style, his “Art as Business” ethos, or to the infamous motifs and events that characterized his controversial career.

Dan Colen and Dash Snow helped foster NYC’s downtown scene of punk bohemians, artists, musicians and hip degenerates in the early naughties, and were both featured on the cover of New York Magazine in 2007 under the heading “Warhol’s Children.” Colen and Snow personify the counterculture, the creative collectivism and the decadence that defined Warhol’s Factory era, a bittersweet heritage that ended tragically for Snow, who died of a drug overdose this past summer just a few years shy of 30, similar to “Factory Girl” and heiress Edie Sedgwick, Warhol’s legendary muse.

Warhol’s early professional years as a commercial illustrator are channeled by street artist xoooox, whose series of stilettos recalls Warhol’s shoe advertisements from the 1950’s, as well as his later works depicting pumps silk screened with diamond dust. When Warhol needed an idea, his friends famously told him to just paint what he loves. Thus, in the early 1960’s the artist began to paint cans of Campbell Soup, which he claimed to eat every day. Awst & Walther’s sculpture invokes Warhol’s iconic soup can motif, as does John Isaacs’ photograph, Yesterday, Today and Tomorrow.

Besides soup cans and money, Warhol’s other favorite subject was undoubtedly celebrities. Zhiavgo Duncan’s silk-screened paintings of forgotten celebrities, culled from back issues of Warhol’s Interview Magazine and then distorted by the artist, allude to Warhol’s signature silk-screened portraits and hint at the terrifying transformations induced by fame. Thomas Eller's piece, THE blind (me) I, invokes Warhol's famous work Double Elvis in its silvery surface and composition. Bruce LaBruce also uses the silkscreen technique to create his homoerotic paintings of zombies, taken from his avant-garde film, LA ZOMBIE: The film that would not die. Marcel Buhler’s series of silk-screened canvases depict superstar artist Josef Beuys, Germany’s Warhol equivalent in terms of stature, but whose social utopian philosophy perfectly contradicted Warhol’s obsession with the cult of celebrity and the spoils of capitalism.

Warhol’s fascination with fame inspired not only his portraits of movie stars and socialites, but also his controversial depiction of the Chinese Communist Leader Mao. In true Warholian fashion, the artist created wallpaper comprised entirely of multiples of Mao’s portrait. Warhol became known for this manner of repetition, as seen in his works 100 Coke Bottles, 100 Soup Cans and 100 Dollar Bills, among others. Integrating Warhol’s use of wallpaper, his style of image multiplication and a 1982 photo of the artist taken in front of Mao’s portrait in China’s Tian'anmen Square, Jomar Statkun’s work The Golden Cast recreates this photograph with himself in Warhol’s place as the basis for his own wallpaper. The juxtaposition of the original photo of Warhol and Statkun’s self-portrait, as well as Mao’s symbolic presence, revives Warhol’s original wallpaper work with Statkun’s contemporary practice.

The video works of scion, Friederike Haman and Terence Koh pay homage to Warhol’s avant-garde filmmaking, while Douglas Gordon’s work Bootleg Empire is literally a bootleg video of Warhol’s 1964 film Empire, an 8 hour black and white silent movie of the Empire State Building. David Levine’s piece Empire Strikes Back also refers, however ironically, to this early Warhol film and is a continuous shot of the front of Warhol’s house on 66th Street in New York, slowed down much more drastically than Warhol’s original work.

Warhol’s Death and Disaster series is revisited in Amir Fattal’s light boxes, which incorporate repeated images of Hiroshima and the artist’s shadow, as well as in Pete Wheeler’s large-scale painting of a totaled, overturned automobile, a direct reference to Warhol’s car crash series. These Death and Disaster works conveyed the horror of everyday tragedy with Warhol’s classic style of detached indifference and the series was ironically followed by the artist’s own brush with death at the hands of a deranged fan in 1968, an event comically recreated by Daniel and Geo Fuchs’ photograph from their TOYGIANTS series, entitled Andy shot.

The New York-based artist Eric Doeringer will be present at the opening, selling his bootleg paintings of Warhol originals, such as his Flowers series, as well as other contemporary masterpieces by art world “superstars.” Doeringer is well known for selling his Bootleg works on the sidewalks of New York's Chelsea gallery district and outside of art fairs at a fraction of the price charged by 'legitimate' dealers, epitomizing Warhol’s belief that “Making money is art and working is art and good business is the best art.”
www.tapeberlin.de