RUPTURE NO 1: BLOWTORCHING THE BITTEN PEACH 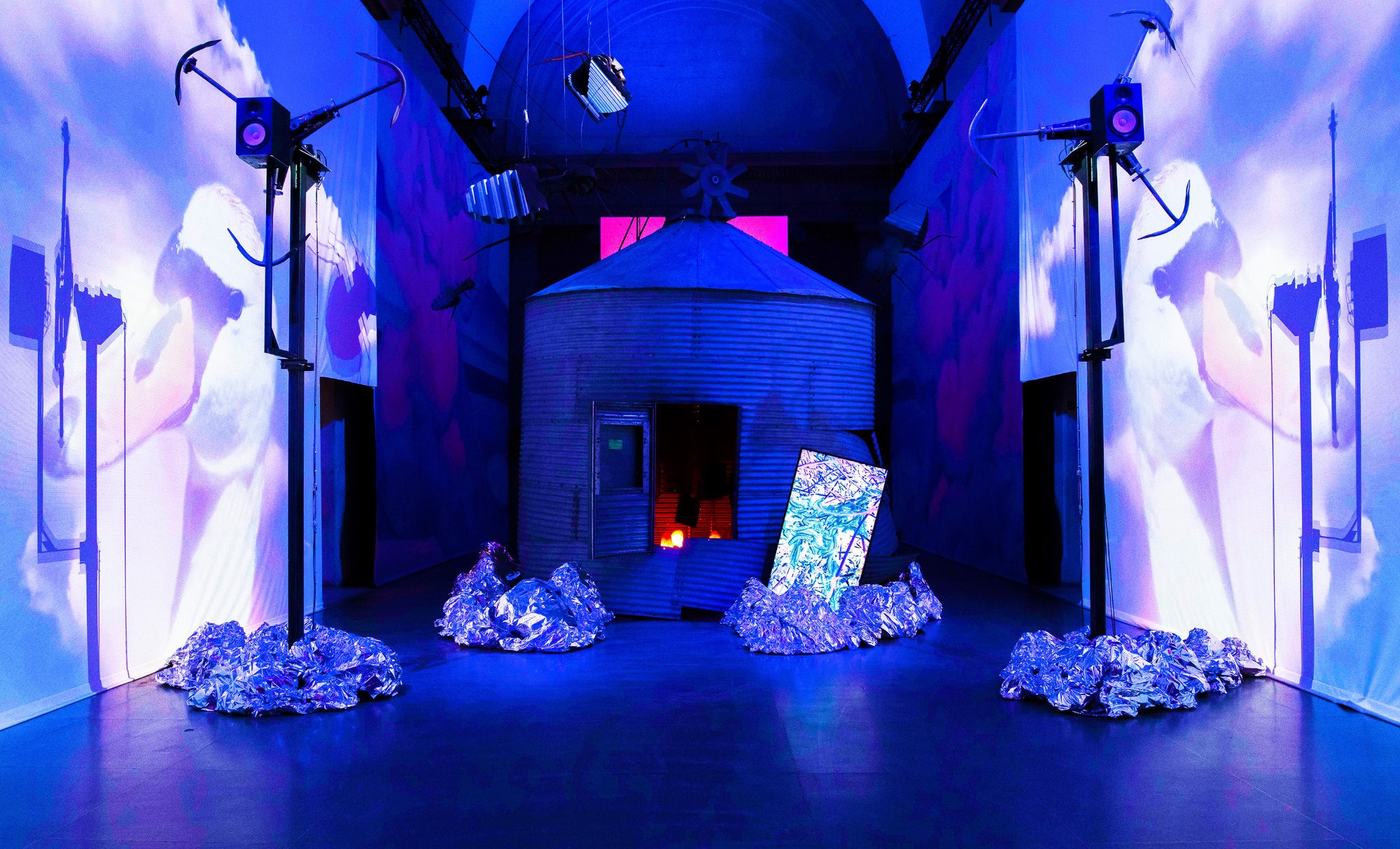 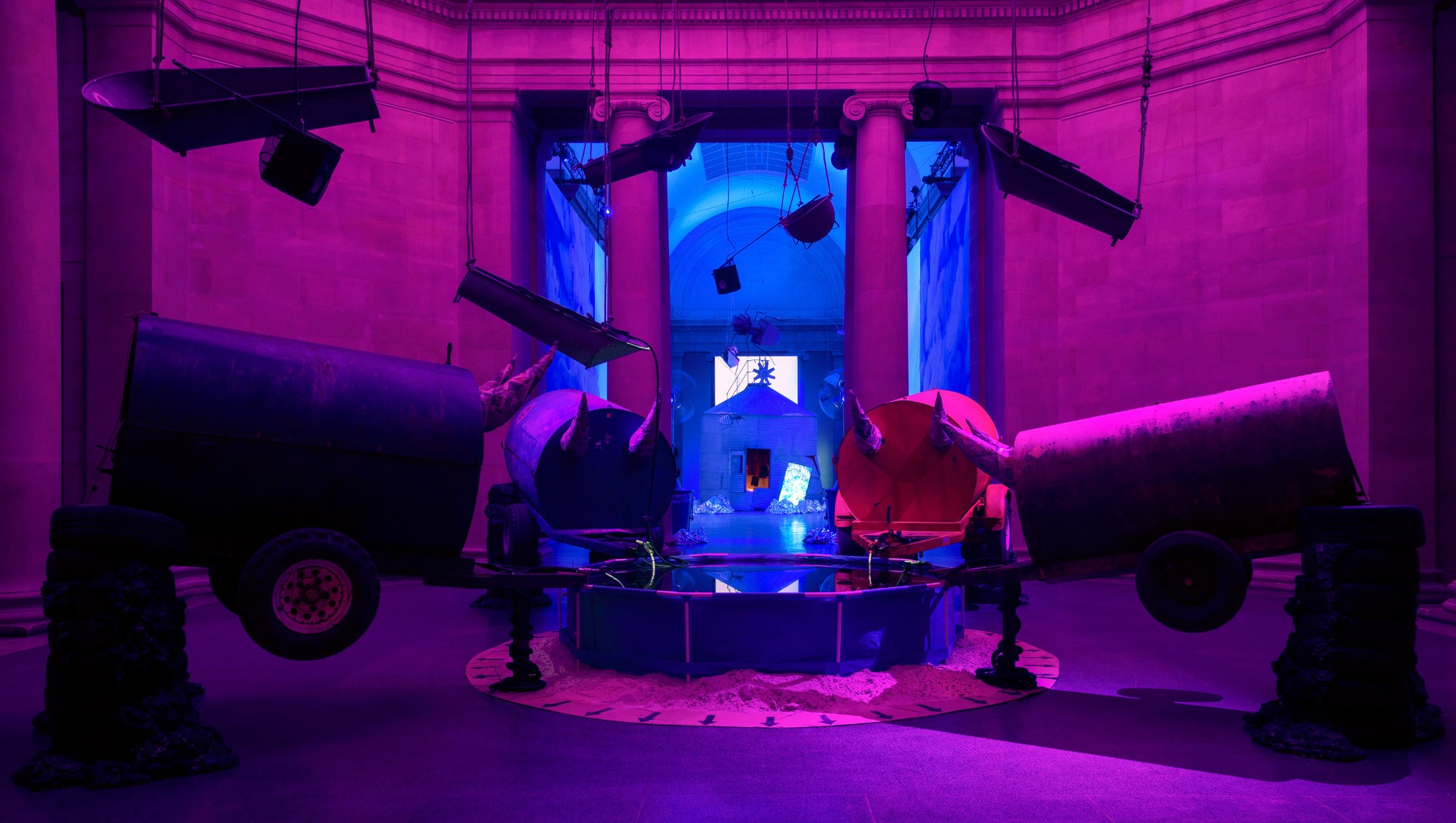 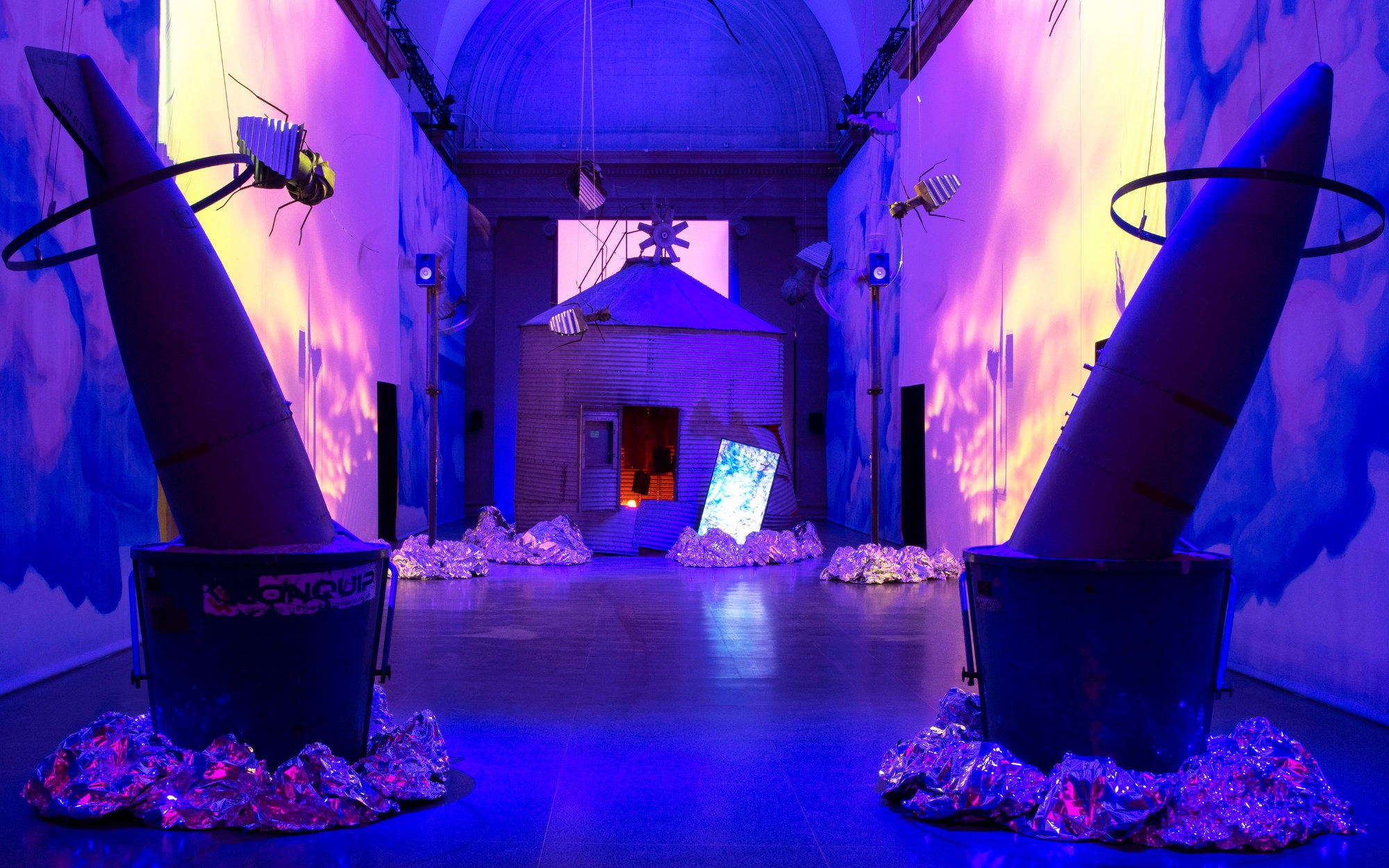 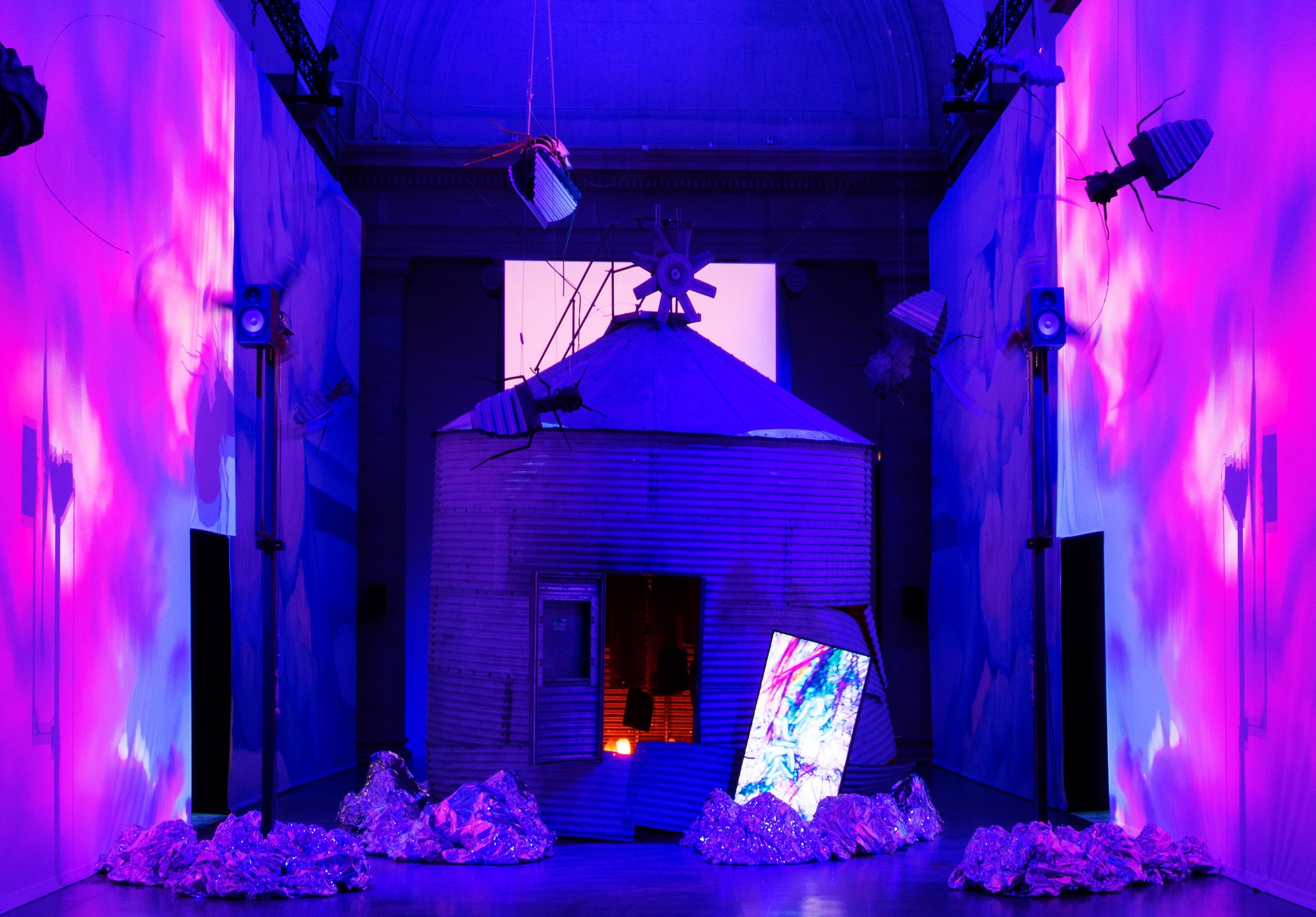 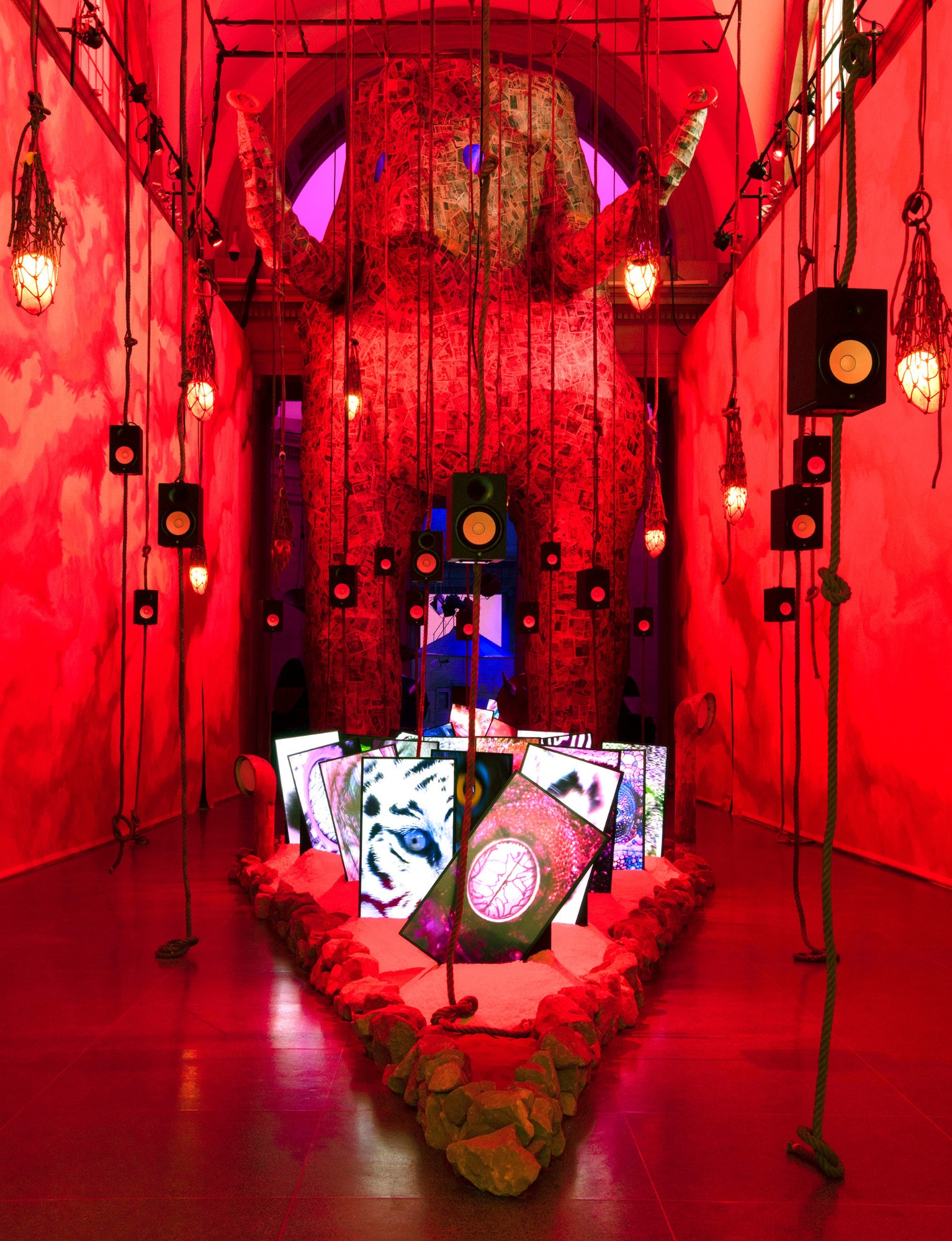 Tate Britain Commission: Heather Phillipson: Rupture No.1: blowtorching the bitten peach © Tate photography (Oliver Cowling)
Tate Britain unveils RUPTURE NO 1: blowtorching the bitten peach, a major new work by Heather Phillipson. Presented for the annual Tate Britain Commission, which invites contemporary artists to respond to the grand space of the central Duveen Galleries, Phillipson’s work is one of the most transformative commissions to date.

Heather Phillipson has reimagined the spaces, in her own words, as a sequence of ‘charged ecosystems, maladaptive seasons and unearthed lifeforms’. She proposes that the galleries are alive and exist in a parallel time-zone. Engulfed by sound, colour and motion, the three interconnected spaces are populated with mutant life-forms, built from technological remains. In RUPTURE NO 1: blowtorching the bitten peach, the work and its title evoke a plurality of sensations and associations that resist coherence. Everything is remixed and redeployed. The artist describes this as an attempt to ‘cultivate strangeness, and its potential to generate ecstatic experience’.

Phillipson’s practice often involves collisions of wildly different imagery, materials and media that conjure absurd and complex systems. Entering the Duveens, visitors are confronted with bisected aircraft fuel tanks, piled aggregates and vast, hand-painted clouds. In the centre, multiple animal eyes glitch across screens emerging from mountains of salt. Further along, visitors encounter various makeshift creatures – a papier-mâché ram, modified diesel bowsers, and insects hammered together from roof vents, car dipsticks and reused steel. In the final space, sand overflows from a collapsed silo, filled with gas canisters that clang like a wind-chime. Rotating anchors and emergency foil blankets are doused in projected light. Each of the three spaces is demarcated by a precise dosage of colour, marking the transition between zones. Augmented animal sounds reverberate throughout.

Phillipson’s Tate Britain Commission coincides with THE END, her 2020 commission for the Fourth Plinth in Trafalgar Square, on view until August 2022, and MUSIC FOR RATS, a project at the Shanghai Biennale 2021. Audacious and disconcerting, her expansive, multimedia projects include video, sculpture, installation, music, poetry and digital media. Described by the artist as ‘quantum thought-experiments’, her works often carry a sense of latent threat – a feeling that received ideas, images, and the systems that underpin them may be on the verge of collapse. The artist has said: ‘I am always aspiring to the condition of becoming alien.’

Alex Farquharson, Director of Tate Britain, said: ‘I’m delighted that Tate Britain will reopen with this hugely ambitious new project by Heather Phillipson. Through her unique layering of images, textures and sounds, she is offering visitors an unforgettable experience. The parallel planet she has created encourages us to consider our own and how we can work individually and collectively to look at it afresh.’