The Ballad Of Saint Jerome 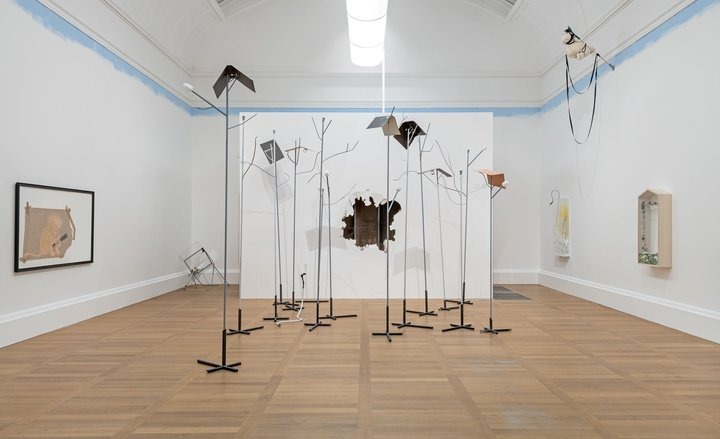 Jesse Darling’s sculptures, drawings and objects reflect the vulnerability of the human body and express the desire to resist the constraints imposed on our lives by social and political forces. The new works presented in The Ballad of Saint Jerome, revisit the story of Saint Jerome and the lion. Jerome was a fourth-century Christian scholar best known for having translated the Bible from Hebrew and Greek into Latin.

According to popular legend, Jerome was confronted by a ferocious lion. Instead of reacting in fear, he recognised that the animal was injured and removed a thorn from its paw. Now tamed, the lion became his lifelong companion. The story was a familiar subject for artists in the Renaissance period, with the lion representing the taming of wild nature and Jerome representing knowledge and restraint. For Darling, the fable is about power as well as healing, raising questions about control, captivity and the subjugation of otherness.

In The Ballad of Saint Jerome, Darling populates the gallery with works made from everyday objects and materials. These take on the appearance of both wounded and liberated shapes. Contorted mobility canes become animated snakes. Cabinets of curiosity try to walk away on their bent legs, and disembodied hands hold aloft ladders intended for caged birds. Figures such as Icarus and Batman undergo a tragi-comic makeover, scrutinised from unexpected angles to reveal their frailty and the need for care and healing.

Creating sculptures from the cabinets that are used to exhibit artworks, Darling subverts the conventions of museum display. Their approach questions how we perceive objects, and how meaning and value are assigned through the authority of institutions.

Jesse Darling lives and works in Berlin and London.