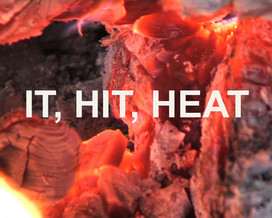 Laure Prouvost uses the irresistible pull of the narrative tradition within film to seduce and entertain the viewer with witty and mesmerising juxtapositions of text and image. Yet implied storylines are quickly undermined by out-of-context comments and visuals that introduce a surreal dimension to the viewing experience.

It, heat, hit 2010 is a new work that constructs and propels an inferred story through a fast-moving sequence of written commentary and excerpts of everyday incidents and pictures that have been filmed by the artist. Innocent and pleasing images, such as a swimming frog or snowy street scene, are followed by statements of love and implied violence. These are inter-cut with strange, disconnected images, such as close-ups of flowers, body parts or food.

The mood of the film gradually becomes darker and more unsettling, though nothing is stated directly. The growing intensity of the film is reinforced by the oppressive rhythm of a drum which accompanies snatches of music and speech.

As with Prouvost's other films, the pace tests the limits of perception and makes it hard to take in every image and comment. Repeated viewing subtly shifts what is understood each time, as Prouvost highlights the slipperiness of meaning and notions of reality.

Laure Prouvost was born in 1978 in Croix-Lille, France, and lives and works in London. She graduated from Central Saint Martins College of Arts in 2002. In 2009 she completed the LUX Artist Associate Programme. Her work, which includes painting, video, sound and site-specific work, has been exhibited widely and solo exhibitions include After the boutcher, Berlin (2009) Lighthouse, Brighton.

She won the EAST International Award 2009 in Norwich, UK. Since 2003 she has also been Director of tank.tv, the online platform for artists' work in moving images.