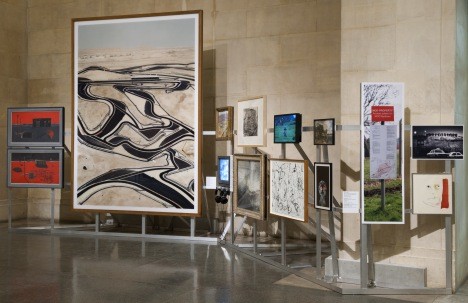 Keiller is best known for his series of film essays, London 1994, Robinson in Space 1997 and Robinson in Ruins 2010 in which a fictional, unseen scholar Robinson undertakes exploratory journeys around England. Robinson’s chance encounters with various locations, for example the site of an 1830 meteorite fall and nearby scenes of local rebellion, prompt him to record and reflect on the significance of each to greater global themes.

The Robinson Institute’s researchers have revisited Robinson’s last known journey, presenting his findings and film footage as an exhibition that features works by artists, mainly from Tate’s collection; writers, historians, geographers, cartographers and geologists; and a variety of other objects.

Audiences are invited to retrace Robinson’s steps and consider the connections that he makes. For example, the 1795 amendment to the Settlement Act, which enabled the rural poor to migrate more easily to industrial towns and cities, is shown alongside an unusually large meteorite that fell the same year. Robinson’s discovery of the Boyle-Hooke commemoration plaque on Oxford’s High Street, which celebrates two of England’s most important scientists, triggers further consideration of the historical events that led to the Industrial Revolution, as his photograph of the memorial site is juxtaposed with Ed Ruscha’s Mad Scientist 1975 and L.S. Lowry’s Industrial Landscape 1955.

Penelope Curtis, Director, Tate Britain, said: ‘Patrick Keiller has risen to the challenge of the Tate Britain Commission in an exceptional way with a new installation that enables us to look at the Tate’s collection in relation to some of the issues that Britain faces today, demonstrating how similar concerns run through time. Patrick Keiller’s sustained interest in understanding the English landscape, and what it can tell us about the origin of some of the world’s problems, strikes a perfect chord with the Tate collection.’

There are more than 120 works on display in The Robinson Institute from historical paintings, prints and drawings by Marcus Gheeraerts, J.M.W. Turner and James Ward; and works from the 20th century by Fiona Banner, Joseph Beuys, Andreas Gursky, Richard Hamilton, John Latham, Richard Long, Paul Nash, Eduardo Paolozzi and Andy Warhol. Works of film and literature range from a first edition of Hobbes’ Leviathan to Beatrix Potter’s The Tale of Little Pig Robinson and the sci-fi film Quatermass 2. The subjects featured in Keiller’s photographs include Northumbrian rock art, a close-up of lichen on an Oxford road sign in the direction of Newbury and a Ministry of Defence sign banning photography of the Atomic Weapons Establishment at Aldermaston.

Head of Contemporary Art Sotheby’s Europe, Cheyenne Westphal, said: ‘We are very proud to be supporting Tate for the fourth year. Sotheby’s sponsorship of the Tate Britain Commission in 2012 allows the work of a British contemporary artist to be exhibited on this international and well-known stage.’

Patrick Keiller was born in Blackpool in 1950. He studied architecture at University College London and fine art in the Department of Environmental Media at the RCA, where he began making films. Since the 1980s, his work has been widely exhibited in the UK and elsewhere, and includes commissions from the Arts Council, the British Film Institute, the BBC and Channel 4. Keiller first exhibited at Tate in the exhibition Artists and Sound in 1982.
www.tate.org.uk/britain