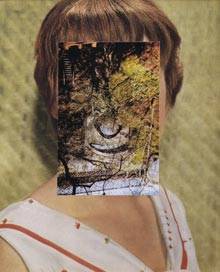 John Stezaker
Mask II 1991-1992
Courtesy The Artist & The Approach, London
Every three years Tate holds a Triennial exhibition at Tate Britain showcasing contemporary art. This is the third Tate Triennial and is curated by Beatrix Ruf, Director of the Kunsthalle Zurich, taking an international perspective on the current British art scene. It includes work from different generations of artists working in a diverse range of media. Many of the artists featured in this exhibition address themes of sampling or re-processing of cultural material. While the appropriation and juxtaposition of images and facts is a recurring theme most commonly associated with post-modernism, the Triennial identifies a significant re-invigoration of these themes in current practice.

There are varying approaches to the use of reference material: from John Stezaker’s ongoing series of collages, to The Otolith Group’s use of archival footage. Visual codes and imagery, often from competing influences, are combined to create highly personal languages and narratives. For example, Rebecca Warren draws from a variety of sources, from Edgar Degas to Helmut Newton, to create roughly modelled clay figures. A key aspect of this year's exhibition is the staging of a performance programme, which reflects the multidisciplinary practices of many of the artists.

The exhibition takes place in the Upper Galleries, the Lightbox space and the central Duveen sculpture galleries at Tate Britain. A key aspect of this year's Tate Triennial is the staging of a performance programme, which highlights the collaborative nature and multi-disciplinary practices of many of the artists selected.