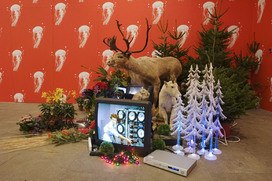 John Armleder, a performance artist, painter, sculptor, critic, curator and expeditionary, is consistent only in his willingness to take creative risks. A member of the Geneva-based Groupe Luc Bois, he was heavily involved with Fluxus during the 1960s and 1970s and was a founder member of the Groupe Ecart in 1969, known primarily for their performances and publications. His work continues to demonstrate the preoccupations of these groups by abandoning hierarchies of different artistic genres and objects.

Armleder frequently examines the context in which art is displayed and views the exhibition as a medium in its own right. In earlier works he questioned the notion of the authenticity of art with installations that united found objects (second-hand or new) with abstract paintings executed by Armleder himself, many of which ironically referred to previous modernist examples. He creates dialogues between disparate objects by placing them within an exhibition context, raising the question of possible equivalences that are created between them when viewed in such a setting.

These concerns remain evident in his most recent body of work, such as this gallery-filling installation made especially for Tate Liverpool. Using a multitude of materials including televisions, scaffolding, mirrors, lights, CD players, animals, pot plants and Christmas trees, he has created a riotous and magical world of disorientating beauty and mystery.

Born in Geneva in 1948, Armleder studied at the Ecole des Beaux-Arts, Geneva (1966-7) and at the Glamorgan Summer School, Britain (1969). He is currently based in Geneva, but lives and works in continual activity around the globe.