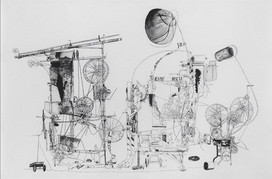 Michael Landy
H.2.N.Y. Self-constructing Self-destroying Tinguely Machine, Museum of Modern Art, 17th March 1960 2006
Tate © Michael Landy
This exciting exhibition will focus upon the connection between the work of Jean Tinguely (1925-1991), one of the most radical, inventive and subversive sculptors of the mid twentieth-century, and renowned British artist Michael Landy, who has been significantly influenced by Tinguely and his constructive and destructive tendencies.

Landy will co-curate Joyous Machines: Michael Landy and Jean Tinguely, and will devote special attention to Tinguely’s rarely examined early career, tracing the development of Tinguely’s work from the late 1940s building up to his momentous Homage to New York. This, the most famous and influential of all ‘auto-destructive’ works of art, was a 27ft high self-destroying mechanism that came to life for 27 minutes before catching fire during a performance in the Sculpture Garden of the Museum of Modern Art, New York on 17 March 1960.

Michael Landy’s comprehensive research and responses to the work, including a new documentary film and a selection of his impressive series of drawings (he has made over 160 in total), will be presented alongside photographs, films and relics of the original event.
www.tate.org.uk/liverpool