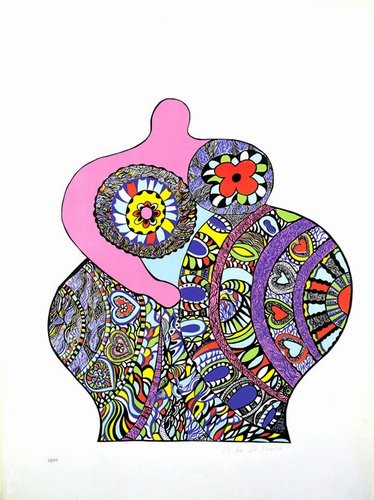 Niki de Saint Phalle burst upon the art world in the 1960s as a beautiful, provocative and fiercely independent artist whose life and work were equally flamboyant. This exhibition spans her entire career, over five decades, and reveals consistent preoccupations in her work including femininity, mythology and fairytales, violence, personal anxiety and international political conflict.

Saint Phalle was self-taught and her life and work were inextricably linked. Through painting, sculpture and assemblage she found a way to manage the complex emotions that had emerged from her childhood and yet still make manifest her exuberant love of life. Her work was in constant metamorphosis with each new phase in her life leading to a new style or concern. She was passionate and relentless in her pursuit of freedom against the conventional constraints of the world around her, be they political, sexual, or aesthetic.

Born in France, Saint Phalle grew up in New York. She moved to Europe in the 1950s with her first husband, Harry Mathews, and continued to live and work there, settling mainly in Paris. In the early 1960s she became the only female member of the avant-garde Nouveau Réalistes, and collaborated with many of the leading artists of the day. She married the sculptor Jean Tinguely in 1971 and continued to work with him for the rest of his life. This exhibition brings together many of her most important works, including some that have been little seen, demonstrating her to be amongst the most original and distinctive artists of the twentieth-century.

Supported by The Henry Moore Foundation with additional support from the French Institute
www.tate.org.uk/liverpool