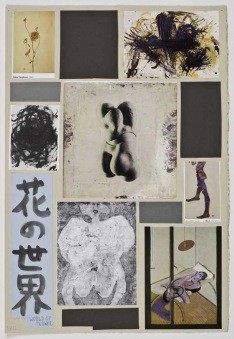 Discover the work of contemporary American artist Richard Hawkins in Richard Hawkins: Hijikata Twist, his first museum exhibition in the UK. The exhibition brings together new works by the artist, exploring the ways in which classic Western figurative painting can be interpreted or ‘twisted’ to create ideas far beyond the established ideas of art history.
Since emerging in the early 1990s, Hawkins has developed a complex practice based on the critical juxtaposition of images and ideas. The exhibition presents major mid-century works by figures including Francis Bacon, Jean Dubuffet and Willem De Kooning, revealing their unlikely effect on the work of iconic Japanese artist Tatsumi Hijikata (1928–1986). New works by Richard Hawkins continue this journey, proposing further connections between art-forms while revealing the influence of Hijikata’s work on Hawkins’ own art.
Richard Hawkins: Hijikata Twist showcases a selection of Hijikata’s original annotated scrapbooks. Their montage of Western art imagery reveal the surprising effect of Western abstract painting on his conception of butoh, a surreal mode of performance developed during the 1960s, typically involving playful and grotesque imagery and performed by individuals in white body make-up. As well as challenging the usual account of butoh being formed as a direct response to Japan’s post-World War Two trauma, the exhibition reveals the migratory influence of Western painting on butoh, and on the work of Hawkins himself as a contemporary artist.
www.tate.org.uk/liverpool