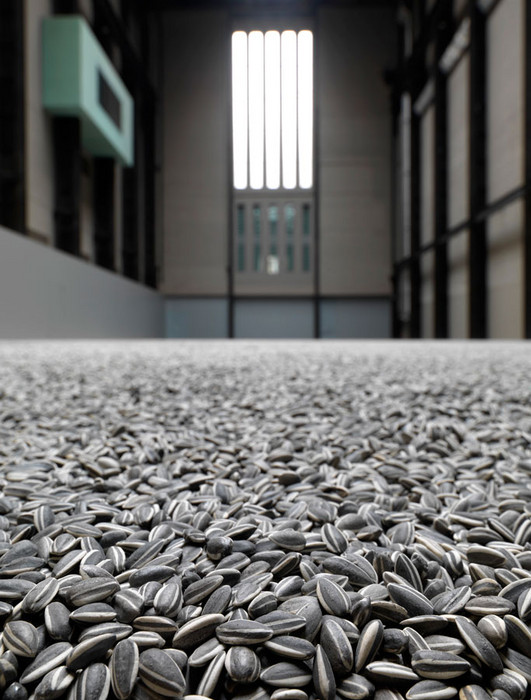 Ai Weiwei, one of China’s leading Conceptual artists and an outspoken cultural and social commentator, has undertaken the eleventh commission in The Unilever Series.

Sunflower Seeds is made up of millions of small works, each apparently identical, but actually unique. However realistic they may seem, these life-sized sunflower seed husks are in fact intricately hand-crafted in porcelain. Each seed has been individually sculpted and painted by specialists working in small-scale workshops in the Chinese city of Jingdezhen. Far from being industrially produced, they are the effort of hundreds of skilled hands.

Poured into the interior of the Turbine Hall’s vast industrial space, the 100 million seeds form a seemingly infinite landscape. Sunflower Seeds is a sensory and immersive installation, which we can touch, walk on and listen to as the seeds shift under our feet. The casual act of walking on the work’s surface contrasts with the immense effort of production and the precious nature of the material. Porcelain is almost synonymous with China and, to make this work, Ai Weiwei has manipulated traditional methods of crafting what has historically been one of China’s most prized exports. Sunflower Seeds invites us to look more closely at the ‘Made in China’ phenomenon and the geo-politics of cultural and economic exchange today.
www.tate.org.uk/modern