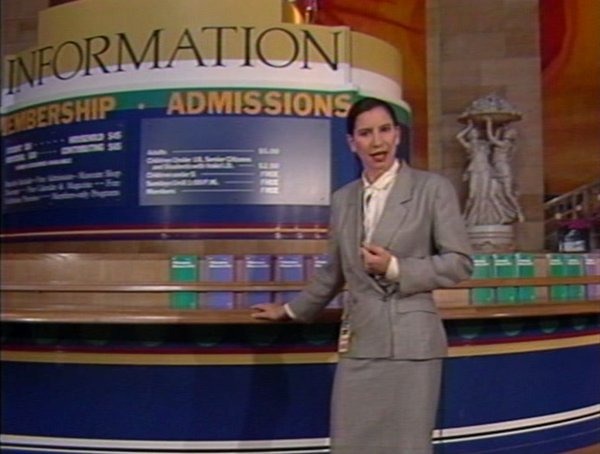 Andrea Fraser's work Museum Highlights: A Gallery Talk originated as a series of live performances. Fraser played the role of a fictional guide named Jane Castleton, who led visitors around the Philadelphia Museum of Art. In the video, she speaks directly to the camera as she walks through the museum. She praises the artworks in an increasingly exaggerated manner. More unusually, she discusses areas such as the toilets and shop, and talks about the museum’s donors.

In her tour she refers repeatedly to the qualities of grace, dignity and order that she feels artworks, museums and gallery visitors should embody. The emphasis on these values draws attention to class-based assumptions about who can consume and appreciate art. Her speech incorporates excerpts from multiple sources. These include texts by philosophers, sociologists and political theorists. However, these quotations are not acknowledged until the end credits.

Fraser’s work often addresses the purpose of art institutions, the official policies and unwritten rules behind their work. She is also concerned with the different roles played by individuals within the art world. This kind of artistic practice is known as ‘institutional critique’.