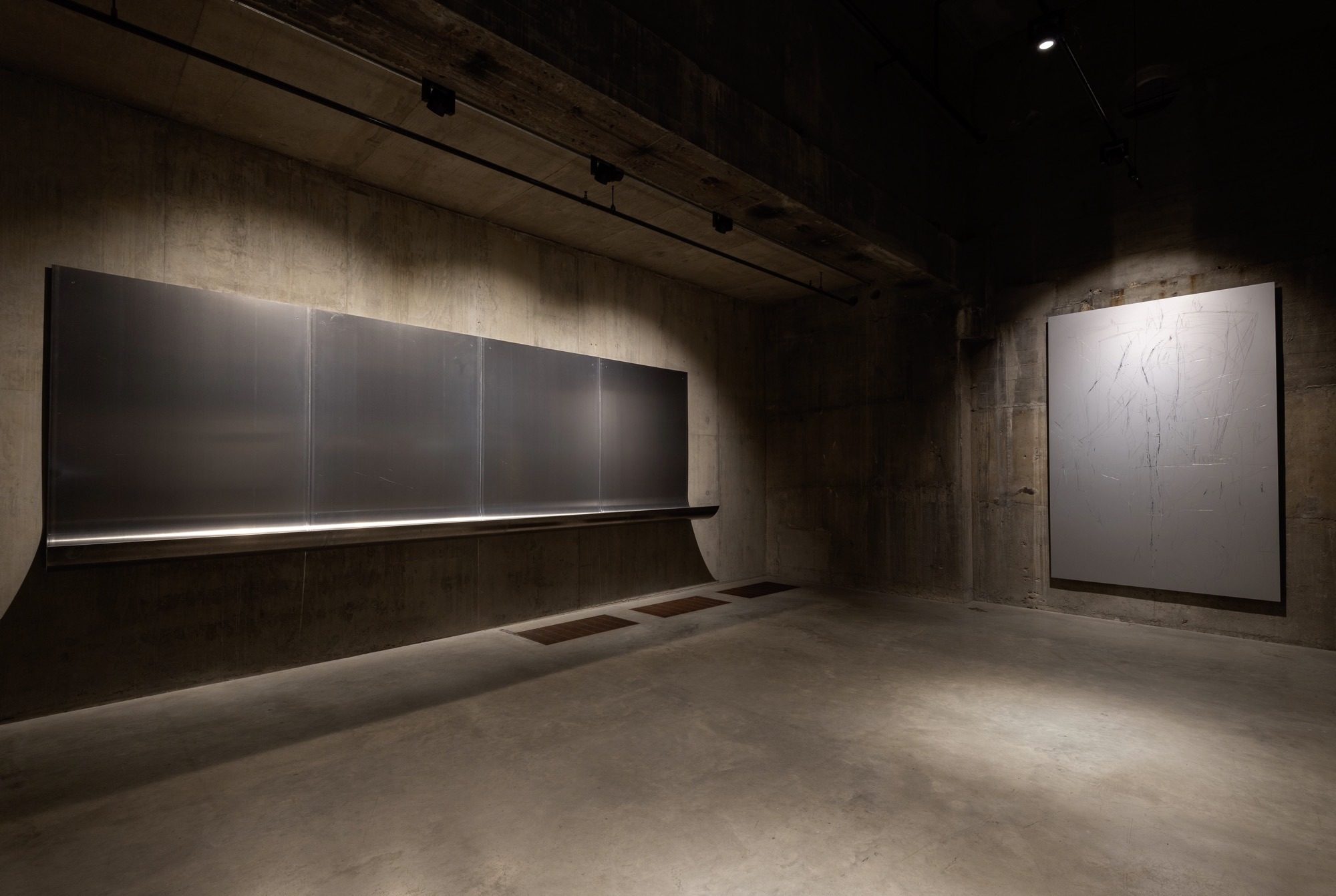 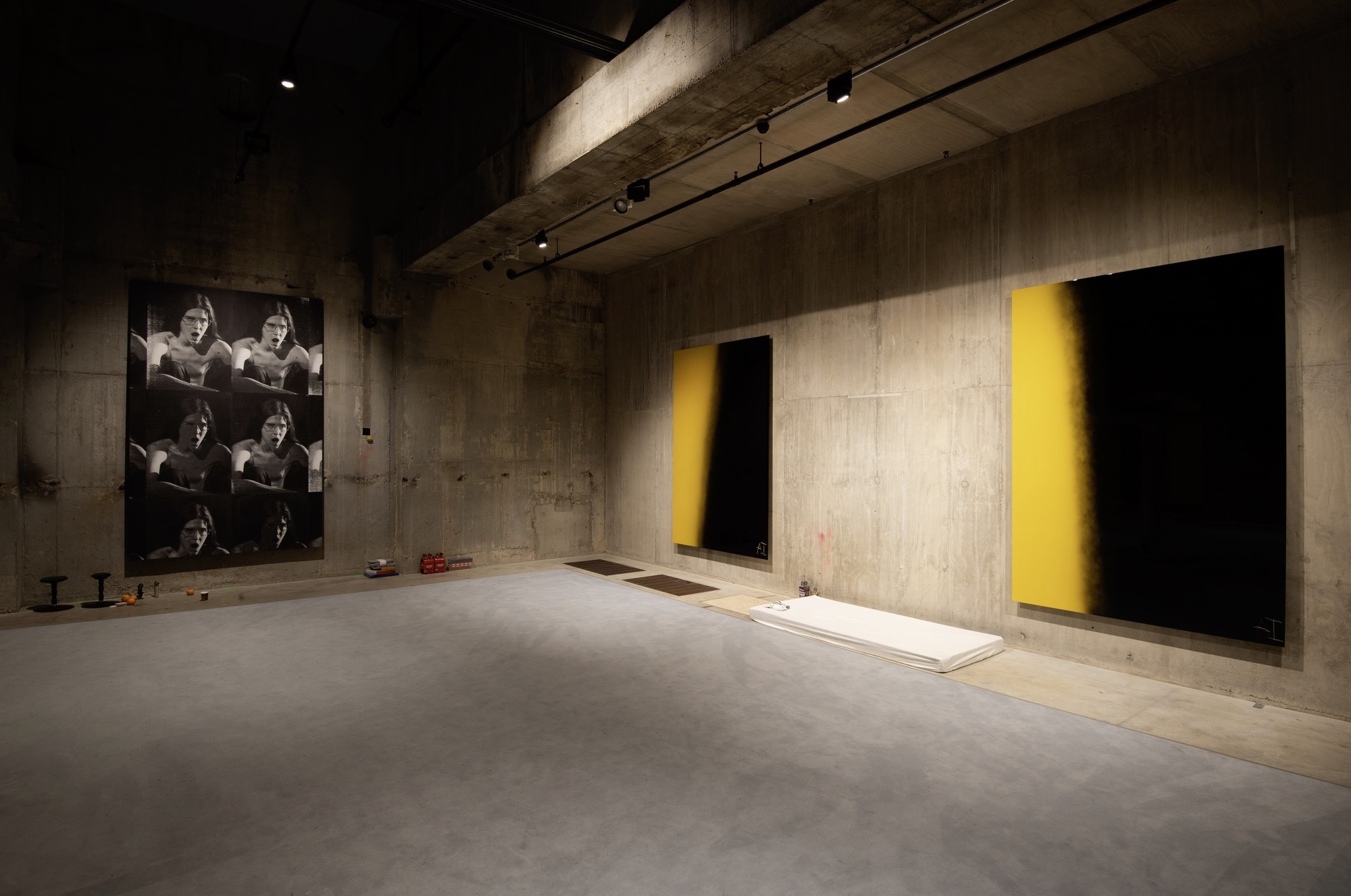 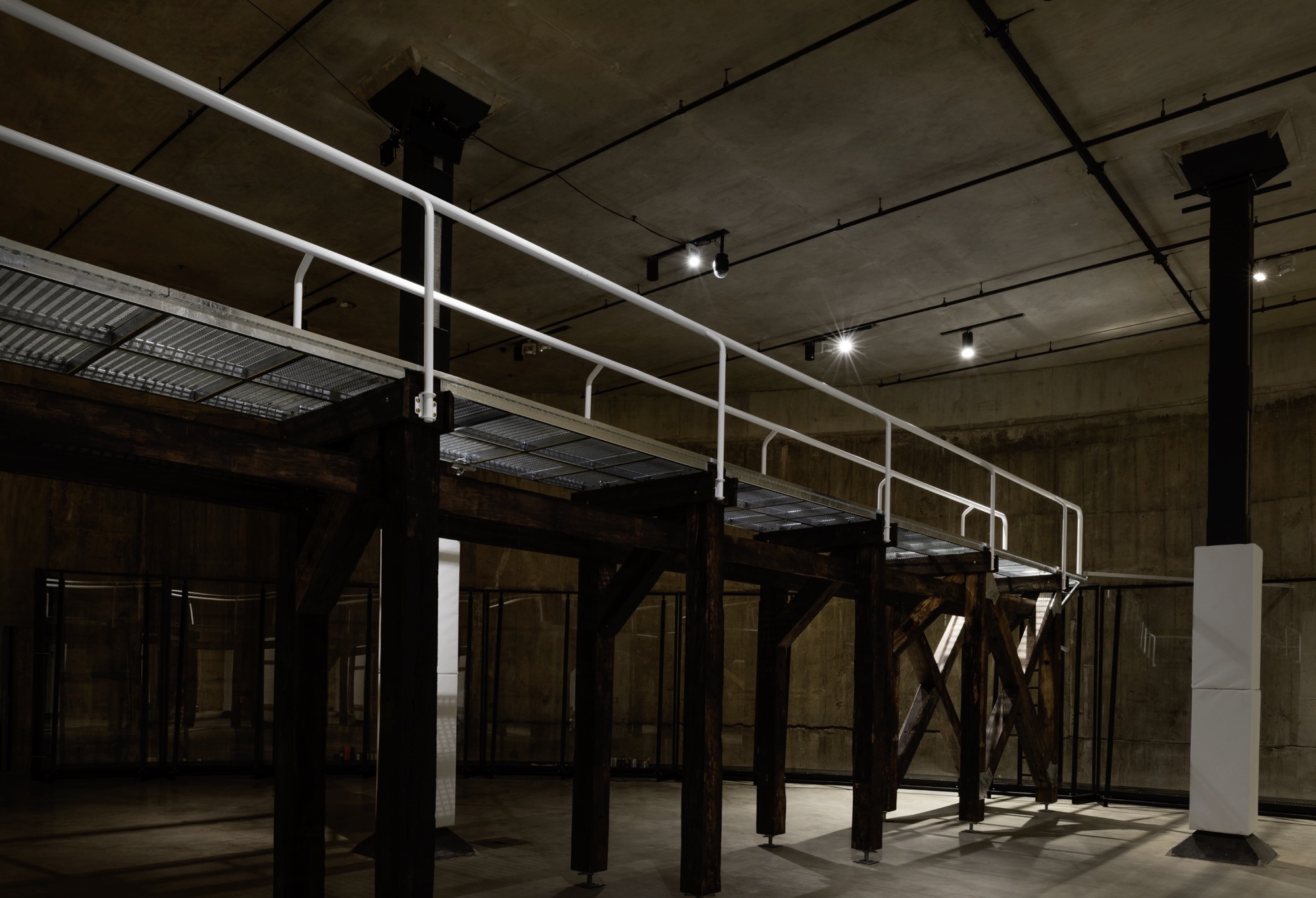 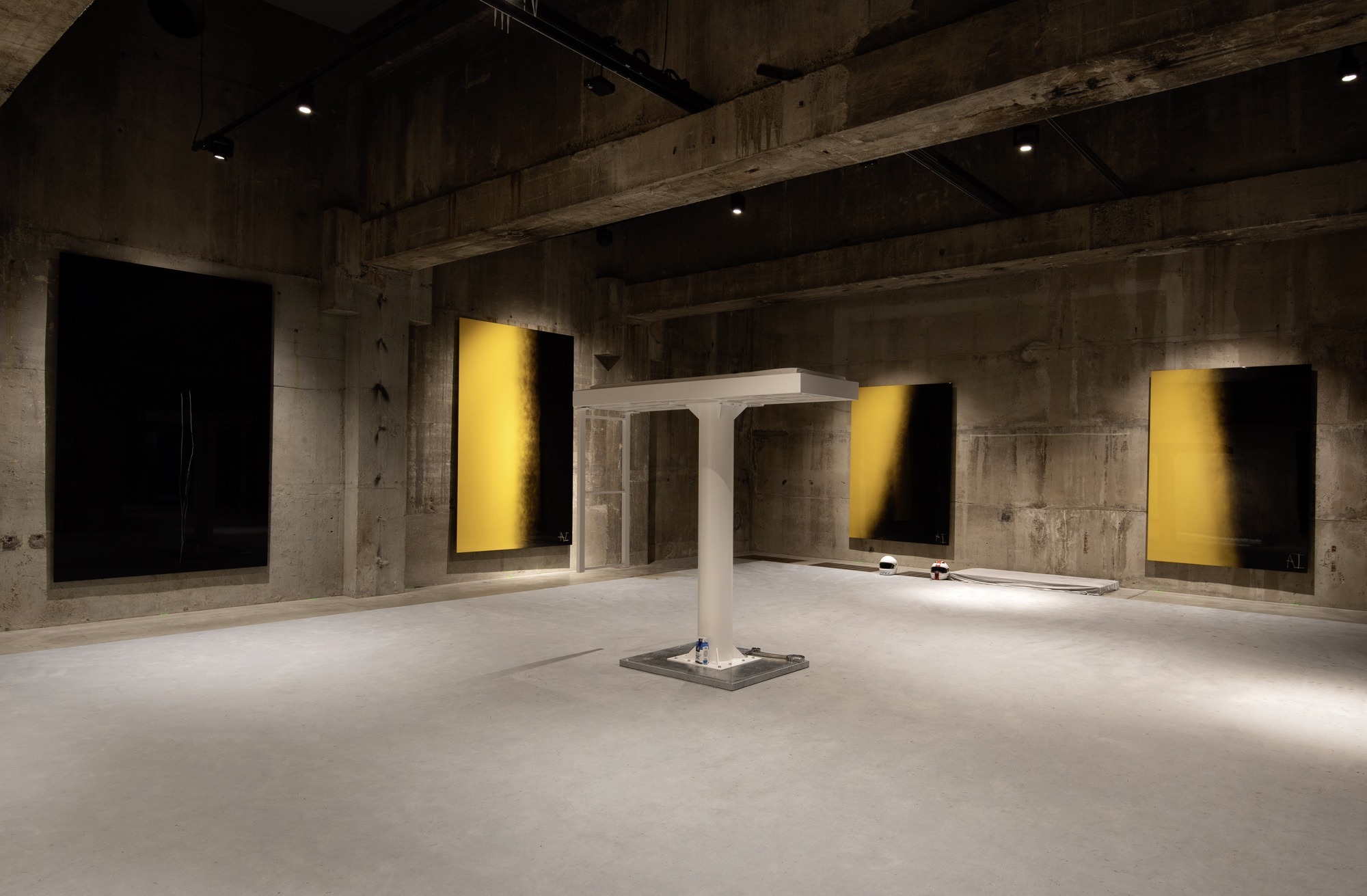 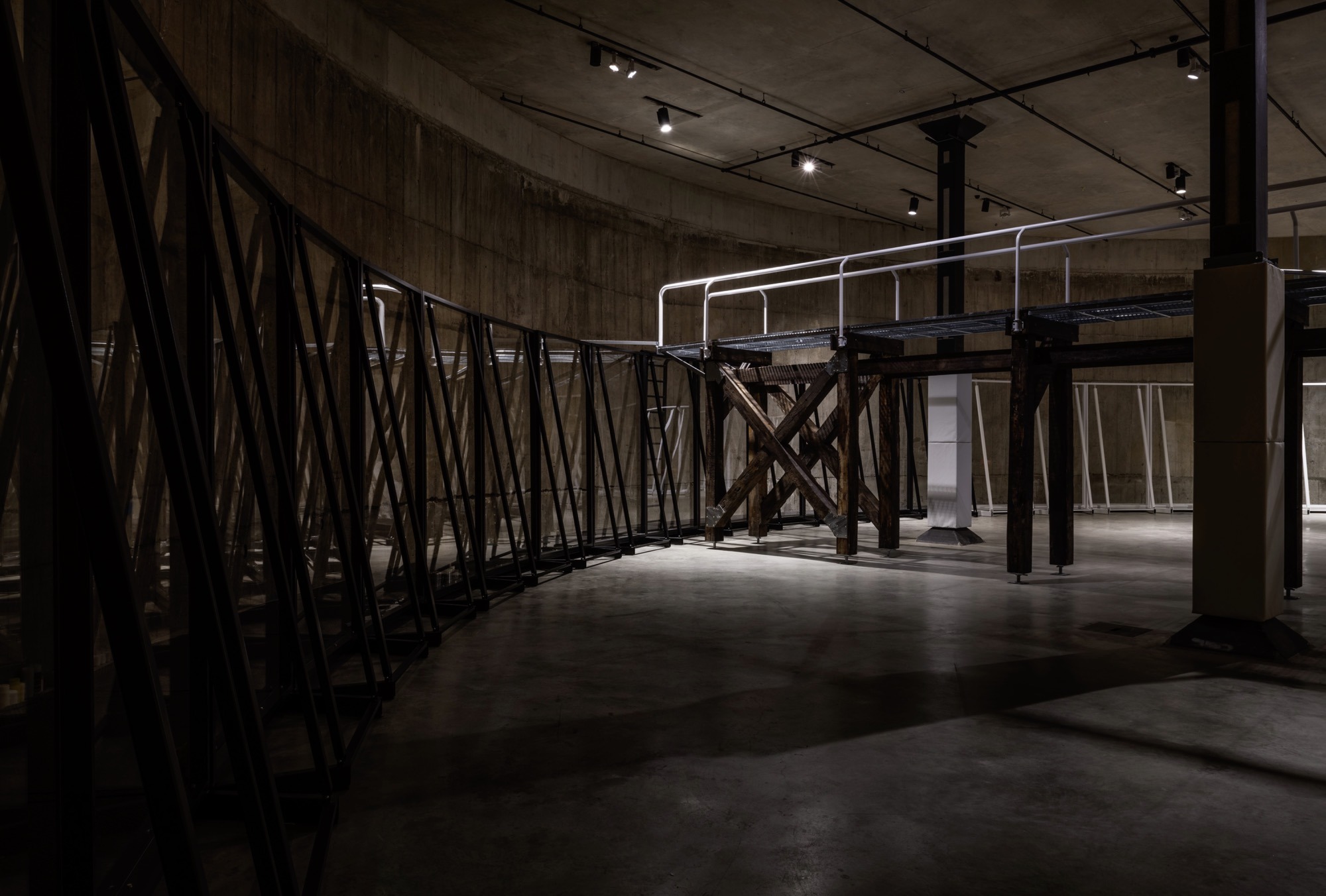 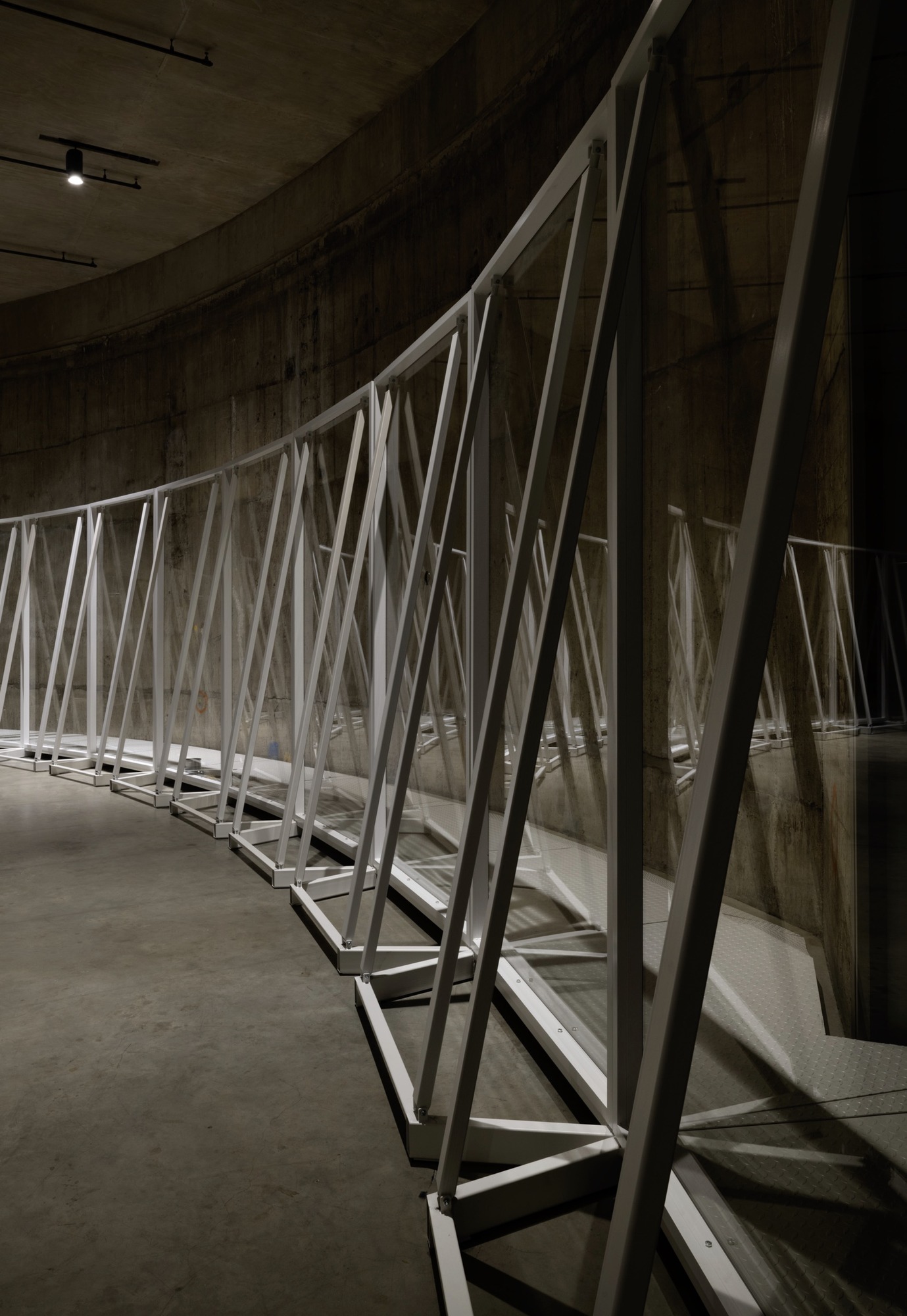 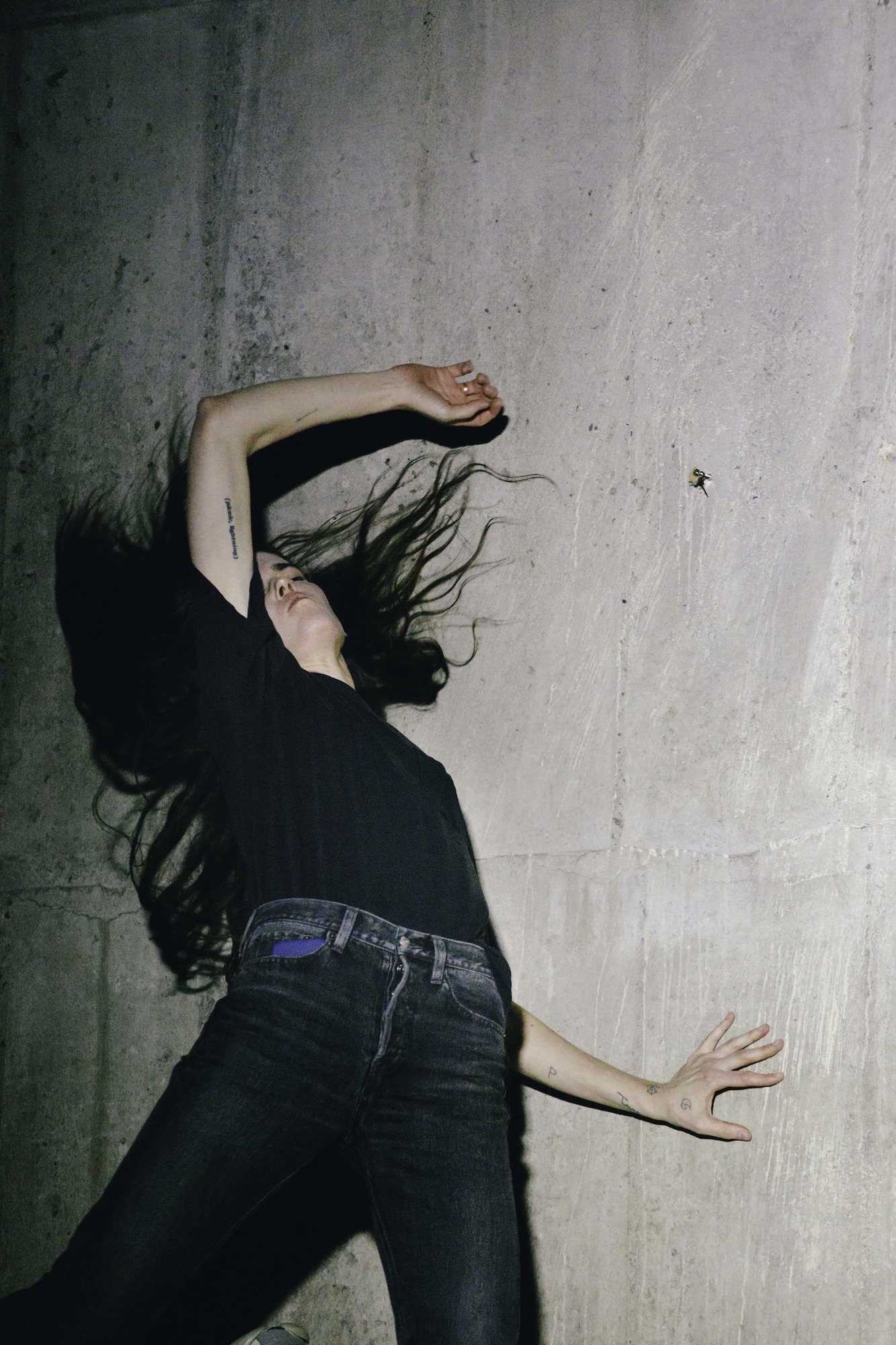 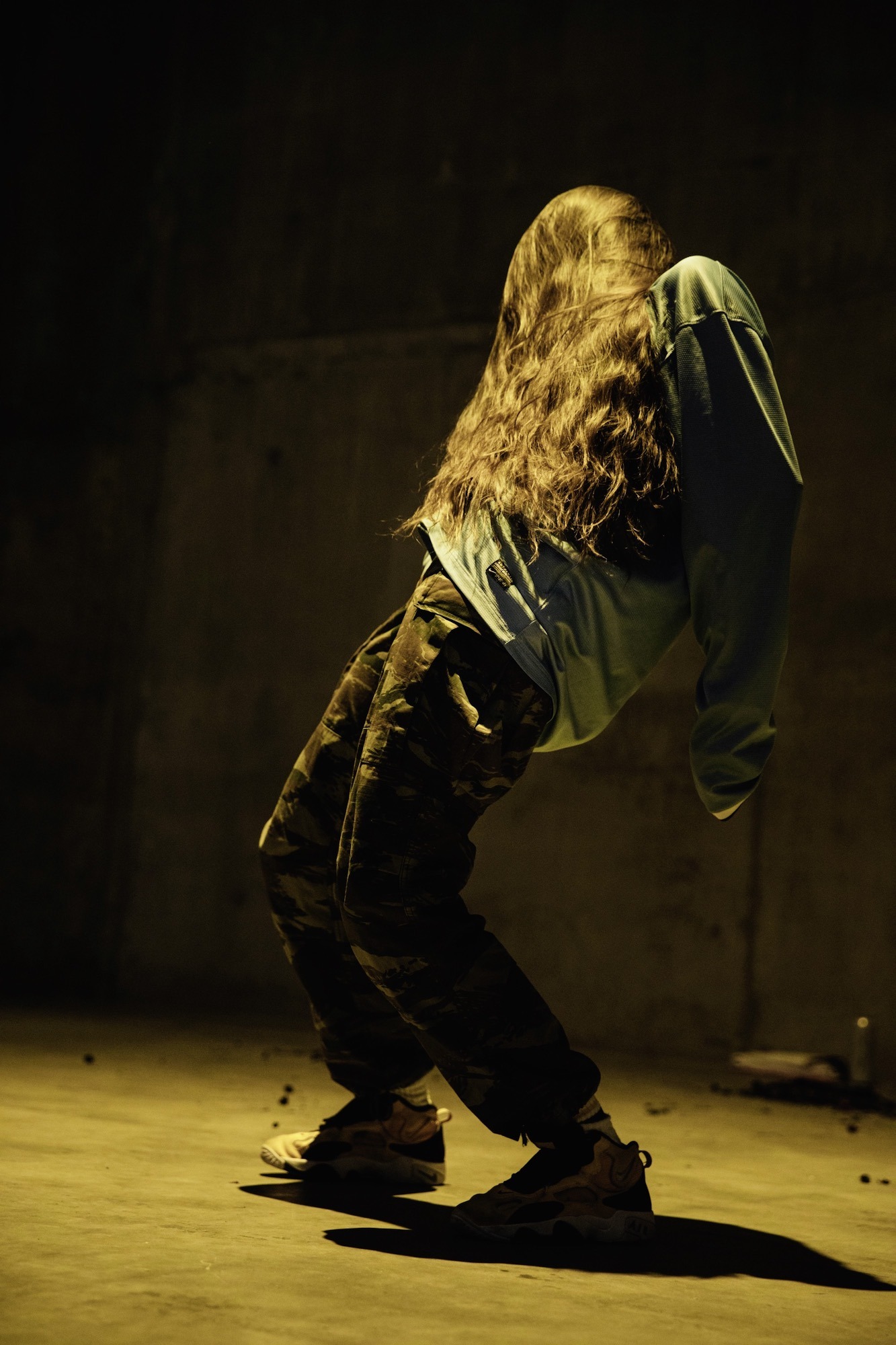 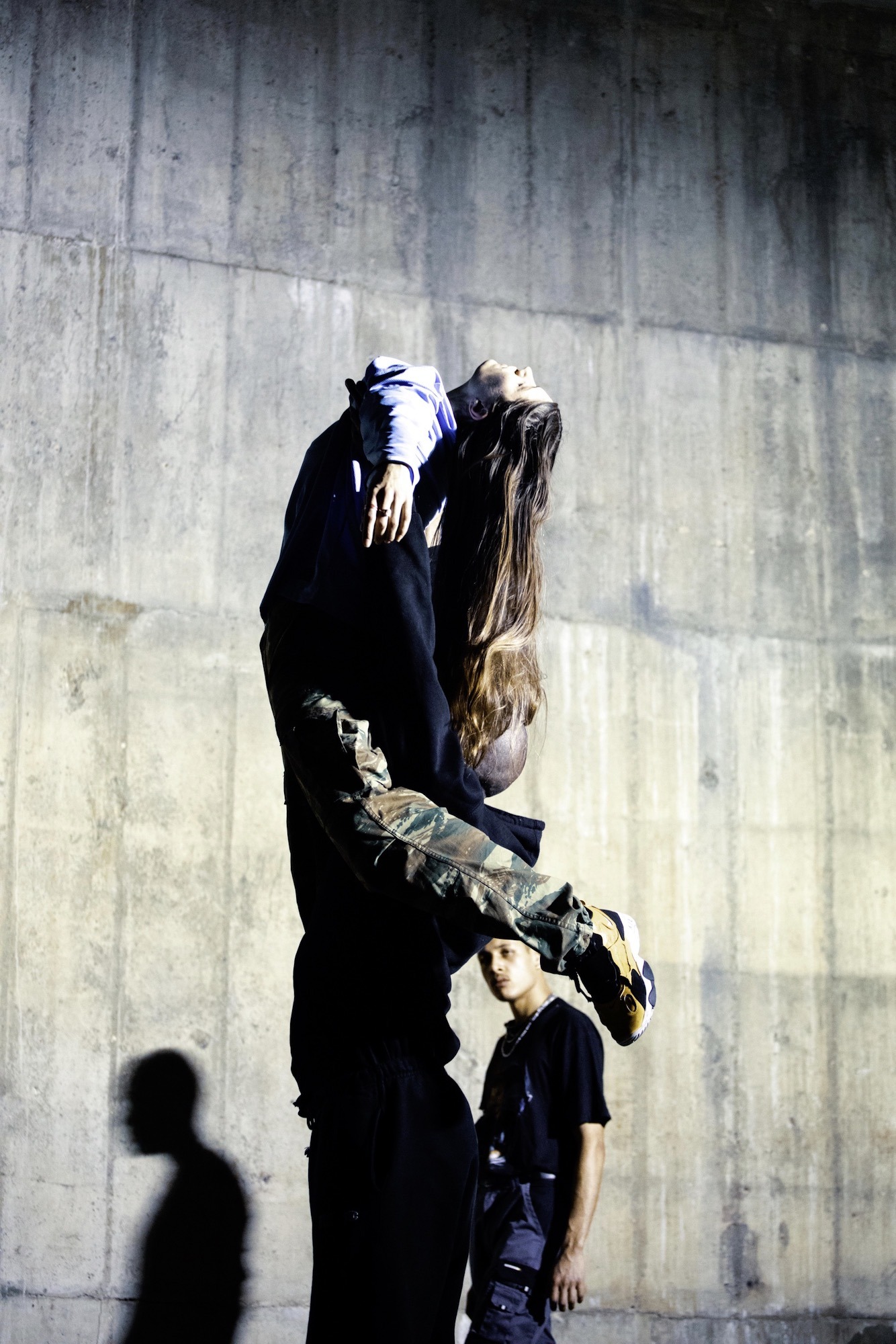 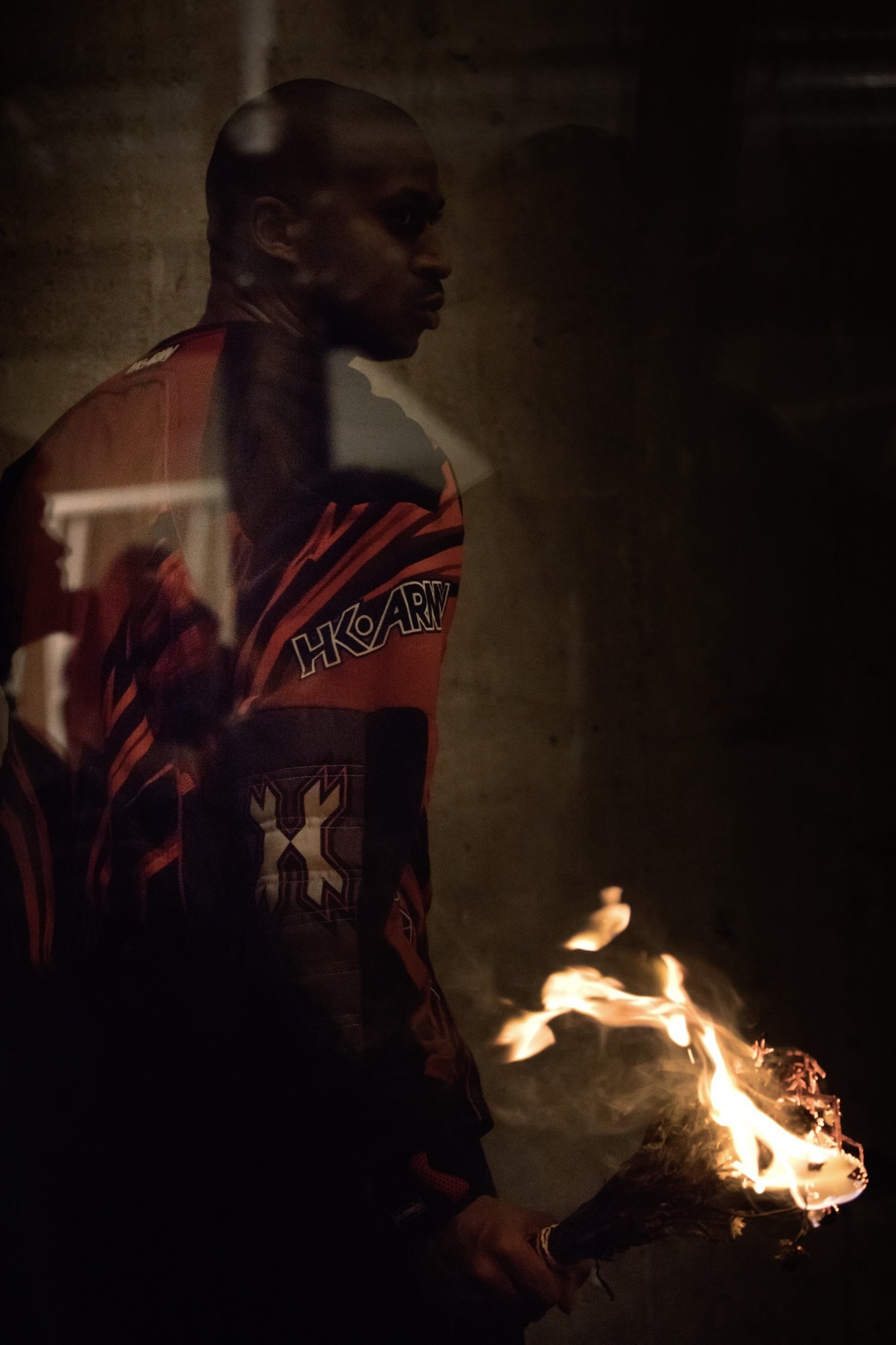 Tate Modern today unveiled a new large-scale commission by Anne Imhof. The dynamic installation combines structural interventions, painting, sound and lighting, unfolding over ten days with six nights of durational performance. Following Faust (2017), Imhof’s intense and engaging work which was awarded the prestigious Golden Lion at the Venice Biennale, Sex is the first project by a solo artist to occupy the full suite of spaces in Tate Modern’s atmospheric Tanks. This is the third annual BMW Tate Live Exhibition, part of Tate Modern’s ongoing performance programme in partnership with BMW.

The commission is both an exhibition by day and a series of six live performances by night. Titled Sex, the work deals with fluidity between binaries – female and male, top and bottom, night and day – and the blurred line where two opposing zones meet. Structural interventions splice through each of the grand spaces. In the South Tank, visitors walk into the space on a raised platform, a scenario mirrored in the East Tank where the hierarchy of viewing is reversed and visitors are situated on the ground beneath a pier. The adjacent Transformer galleries display a collection of Imhof’s Gradient and Scratch paintings, alongside elements of sculpture that intervene in the architecture.

Since 2012, Imhof has worked with a core group of collaborators from diverse backgrounds to make her durational performances. During six remarkable evenings at Tate Modern, they will inhabit the space while interacting with each other and engaging with situations and objects that serve as settings for their characters. Imhof doesn’t appear in the work herself but is present, orchestrating the work and sending notes and directions to her collaborators. Power dynamics between performer and viewer are also a key component of the work. Viewing positions alternate between high and low, shifting perspectives on the live tableaux. Performers also occupy an inaccessible zone behind a glass partition in the East Tank, onto which they paint. Music specially composed together with Billy Bultheel and Eliza Douglas for the unique acoustics of the subterranean galleries bleeds through each space. Although the structure and score of the live work is carefully developed by Imhof, what happens within the four-hour duration is dependent on the individuality and agency of the performers, making each staging unique and unrepeatable.

This year’s exhibition follows the success of the first two BMW Tate Live Exhibitions in 2017 and 2018. These groundbreaking programmes pioneered a new model for the exhibition format with an ever-changing series of installations and live performances across ten days. Taking place in the Tanks, the world’s first museum spaces dedicated to performance, film and installation, the BMW Tate Live Exhibitions have showcased a wide range of artists including Joan Jonas, Fujiko Nakaya, Isabel Lewis, Jason Moran, Mark Leckey, Jumana Emil Abboud, Wu Tsang and Fred Moten.

BMW Tate Live Exhibition is curated by Catherine Wood and Isabella Maidment and produced by Judith Bowdler. Sex is the first of three chapters in a project commissioned by Tate Modern, London, the Art Institute of Chicago, and Castello di Rivoli Museo d'Arte Contemporanea, Rivoli-Turin. It is staged at Tate Modern in partnership with BMW, with additional support from Outset Germany_Switzerland.
www.tate.org.uk/modern