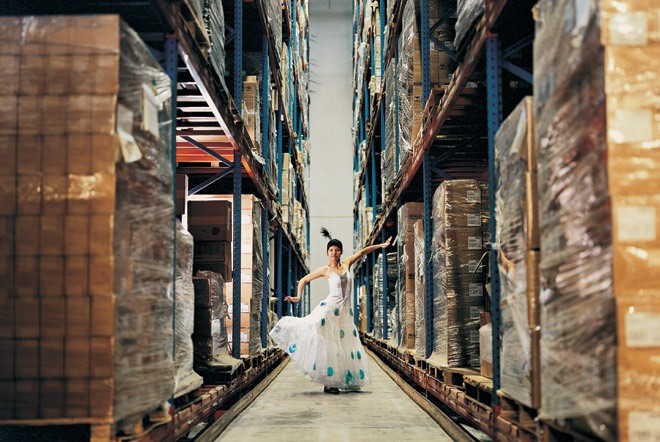 Whose Utopia? 2006 contrasts the humdrum reality of life in a lighting factory with the dreams and aspirations of its younger workers at a time of economic growth and social change in China.
Artist Cao Fei spent six months with the employees of a lighting manufacturing plant in China’s Pearl River Delta region, an industrial megalopolis that in the past two decades has attracted great numbers of migrants from poor rural areas. The artist documented the workers’ daily life, from the factory floor to their humble living quarters. At the same time she conducted interviews about their passions and ambitions beyond their day job, and invited some of the workers to be filmed performing scenes based on their responses.
The first part of the video shows workers absorbed in their repetitive tasks, acting almost as extensions of the machinery surrounding them. From the relentless rhythms of the assembly line to the busy offices and orderly stockrooms, the whole process takes on a hypnotic quality, enhanced by the eerie instrumental soundtrack. In the second part the factory aisles are animated by the fantasies of a handful of workers, seen dancing or playing guitar as their colleagues keep toiling, seemingly unaware. The final segment consists of filmed portraits of individual workers, pausing from their tasks to look straight into the camera. Such vignettes offer a glimpse into their personalities and inner lives, depicting them as much more than cogs in the collectivist machine fuelling China’s economy.
Cao Fei was born in 1978 in Guangzhou, China. She lives and works in Beijing.
www.tate.org.uk/modern