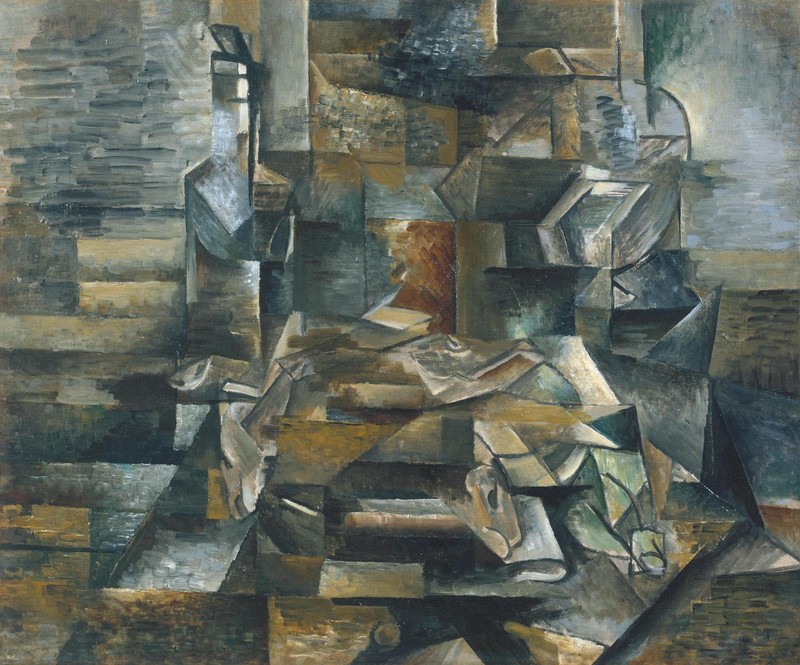 In 1909 Georges Braque’s paintings were described as made of ‘little cubes’. The insult was soon embraced as a name for this new vision of the world.
The term cubism described the fragmented image, but could not really convey the perceptual and conceptual aspects of the artists’ practice. Turn-of-the-century scientific and technological advances, such as X-rays and radio-waves that penetrated the fixed surface of matter, made pictorial conventions seem inadequate for capturing modern life. Instead the structures of cubist paintings attempted to represent the complex nature of experience while acknowledging the flat canvas.

From 1909 to 1914, Georges Braque and Pablo Picasso developed a detailed visual analysis of reality. They began by unravelling the familiar world about them, depicting still-lives and figures. The limited colour and build-up of small brushstrokes were influenced by Paul Cézanne, while African art encouraged the simplification of forms as planes or facets. The reconstruction of reality became evident as traces of the visible were gradually eliminated (especially around 1911), and illusory elements in collage and assemblage were introduced from 1912 onwards.

Braque and Picasso’s intense collaboration tended to be exclusive, with neighbours such as Juan Gris gaining only partial acceptance. Nevertheless, the impact of cubism was very widely felt among Parisian artists such as Jean Metzinger and Albert Gleizes, who published Du Cubisme in 1912, and among modernists in other major centres who rethought it for their own purposes. Though Braque and Picasso did not entirely relinquish reference to the visual world, others recognised cubism as an essential step towards abstract art. When Naum Gabo wrote of ‘The Constructive Idea in Art’ in the 1930s he was forthright: ‘All previous schools in Art have been ... merely reformers, Cubism was a revolution.’
www.tate.org.uk/modern