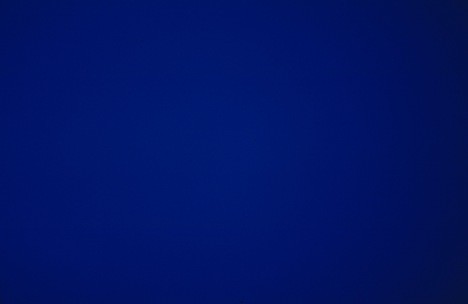 Blue was completed in 1993, the year before Jarman succumbed to AIDS-related complications. It was first screened at the 1993 Venice Biennale. This display marks the twentieth anniversary of the film’s release, as well as celebrating Jarman’s life and work two decades after his passing.

In 1974, Jarman saw Yves Klein’s monochrome painting IKB 79 at the Tate Gallery and conceived the idea of making a ‘blue film’ dedicated to the French artist. Indeed, the single frame used in the film was initially a photograph of Klein’s work. Klein used an ultramarine pigment solution that he patented as International Klein Blue. He saw the colour as embodying his idea of art as a rarefied sensorial experience, transcending reality to reach an immaterial, spiritual beyond.

Diagnosed as HIV positive in 1986, Jarman returned to the idea of a ‘blue film’ when he started losing his sight, and medication was causing him to see as if through a blue filter. The script, recited by actors and by Jarman himself, incorporates both poetry and narrative prose, exploring different meanings and interpretations of the colour blue such as melancholy, water and the infinite, alongside autobiographical episodes and invocations to a character called Blue. The soundtrack, composed by Simon Fisher Turner, is accompanied by a soundscape by Marvin Black that includes time-marking sounds such as ticking clocks, chimes and gongs, as well as music by Brian Eno, Coil and Erik Satie among others.

Derek Jarman was born in Northwood, England in 1942. He lived in London and Dungeness, Kent, and died in London in 1994.