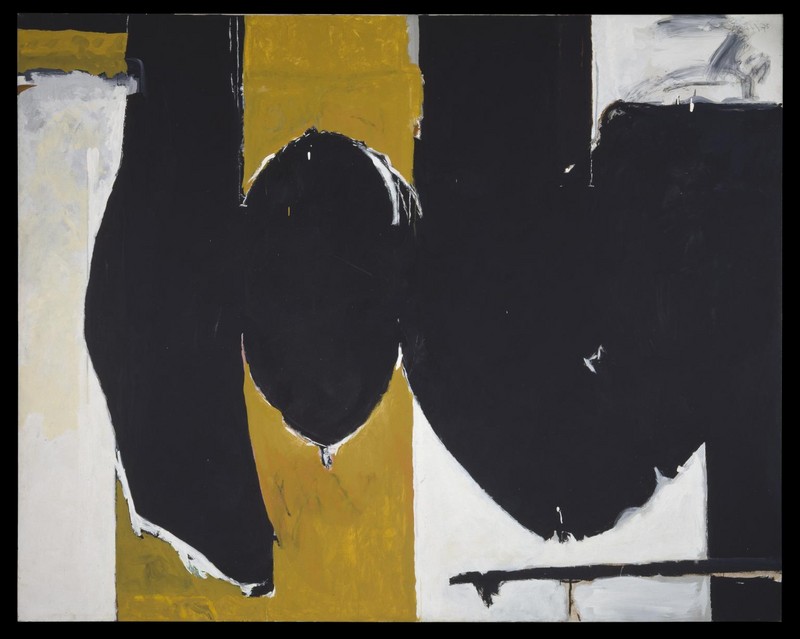 The works in this room explore meditative and sometimes sombre approaches to abstraction, each concerned in some way with the passing of time.

While the shadow of the Second World War dominates the central room of this wing, Robert Motherwell was haunted by the conflict that preceded it, in which the forces of fascism triumphed: the Spanish Civil War. Begun while Spain was still ruled by General Franco’s military dictatorship, Motherwell’s Elegies to the Spanish Republic grew to a vast series of paintings. In 1951 Motherwell described them as ‘an attempt to compose a subjective image of modern Spain. They are all in black and white: celebrations of death, songs of mourning, elegies – barbaric and severe.’

Contrasting with the mood of mournful grandeur summoned by Motherwell, Joan Mitchell’s paintings draw the eye in with subtle chromatic effects. Her work often evokes memories of the natural landscape, traced through the process of painting and embodied not through literal description but in clusters and drips of paint. The energetic handling in Number 12 announces the action of making in a way that echoes the critic Harold Rosenberg’s famous description of the canvas as ‘an arena in which to act’.

The Korean artist Lee Ufan was one of the leaders of the Mono-Ha group, which emerged in Japan in the late 1960s and used the arrangement of materials to explore relationships between the object, the viewer and the world. His paintings echo the visual language of western abstraction but are also rooted in the artist’s philosophical concerns. The From Line series uses repetitive brushwork to portray the passage of time. Each vertical line is composed by loading the brush with paint and slowly drawing it downward, recording the gradual fading of the stroke.