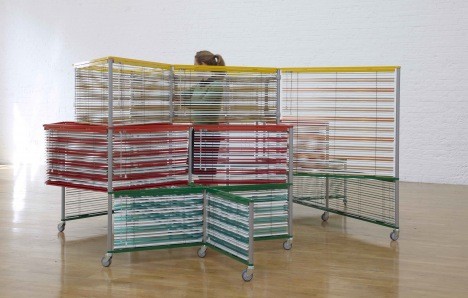 Haegue Yang’s mobile sculptures, Dress Vehicles, will be displayed in the Tanks. The wheeled structures are formed from domestic clothes horses and blinds, animated with moving lights and projected images. They are given titles like Bulky Lacoste Birdy and areinspired by Oskar Schlemmer’s seminal Triadisches Ballet (1922). The audience is invited to work with the sculptures to choreograph their own movements in the space, creating a relationship between viewer and object as they ‘dance’ together. Yang will also work with a number of performers to choreograph moving the sculptures. These performances will be staged at various times throughout the week long installation.
Yang (born Seoul, Korea, 1971, lives and works Berlin) works with everyday materials, often domestic ones, to create colourful installations that often combine industrial materials with sensory effects using light and scent. She has also created a number of different performance and video works. Yang graduated from SeoulNationalUniversity with a BFA and emigrated to Germany in 1994. There she received her Meisterschüler from Städelschule Frankfurt am Main in 1999. Solo exhibitions include the Kunsthaus Bregenz (2011), Modern Art Oxford (2011), the New Museum, New York (2010–11), the ArtsonjeCenter, Seoul (2010), the WalkerArtCenter, Minneapolis (2009–10) and Portikus, Frankfurt/Main (2008). She represented Korea at the Biennale di Venezia (2009) and has participated in the Bienal de São Paulo (2006). Most recently her work was included in dOCUMENTA (13) in Kassel, Germany (2012).
www.tate.org.uk/modern