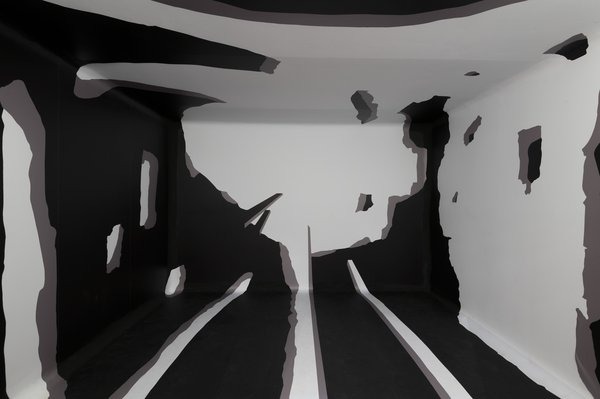 The interior space of Irina Nakhova’s apartment was central to her artistic work. She lived in the Soviet Union during the 1980s, where the state supported artists working in the predominant socialist realist style – art ‘national in form and socialist in content’. As an unofficial artist, she did not have access to exhibition spaces or art materials, which were reserved for state-approved artists. However since the 1960s, intellectuals and unofficial artists had been turning their apartments and studios into creative spaces for exhibitions and debates. Nakhova went one step further, transforming her flat into her art installations.

For Room No. 2, Nakhova removed the furniture from the 4 x 4 m2 living room of her apartment, covered the surfaces with white paper and layered them with grey and black shapes. Recreated here, Room No. 2 was the second of four ‘total installations’ that she made in the apartment between 1983 and 1986, each existing for two weeks at a time. There, she experimented with disorientating those who stepped into the space, ‘wanting to show pictorial space and kind of get inside it, and on the other hand, to simply destroy the space that’s around me’.

Room No. 2 became a space for artistic debates for the tight-knit community of Moscow conceptualist artists, documented by the German theorist and filmmaker Sabine Haensgen.

Nakhova’s 1989 paintings Simultaneous Contrast experiment with the shift between two-dimensional and three-dimensional space. Borrowing details from a 1930s Soviet album of photographs, Nakhova produced abstract forms from material linked with the Soviet system.