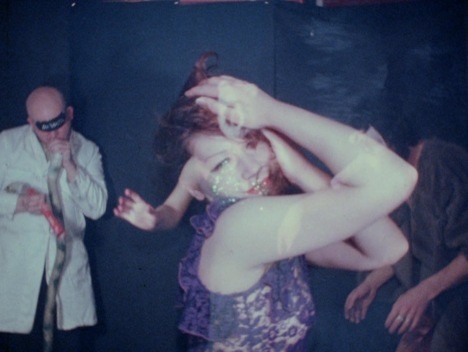 Part of the series The Tanks: Live programme

Brighton-based Jeff Keen (1923-2012) was one of Britain’s most unique cultural voices, a pioneer in experimental film who transformed art and cinema through a vivid sensibility fuelled by surrealism, comics and B-movies. A veteran of the Second World War, Keen’s work is a powerful evocation of the violence, colour, speed and noise of the 20th century. His rapid-fire animations, multiple screen projections and raucous performances redefined multimedia art in the UK. This major installation, conceived by Keen in response to the unique nature of the Tanks space, and a series of events will draw on Keen’s early experiments in drawing, painting and animation, his fascination with surrealism and popular culture, and his radical development of expanded cinema, cut-up soundtracks and unruly live action.
Keen transformed cinema into a riotous collage of comics, drawings, B-movie posters, plastic toys, burning props and extravagant costumes. His early 8mm and 16mm films are built for speed, combining footage of Beat-era motifs – jazz, motorbikes and car culture – with experimental animations in which the achievements and atrocities of the 20th century seem to flash by within a few short, cacophonous seconds. A single frame could not contain the frenzied energy of Keen’s imagination, and by the mid-1960s he began to use multiple screens and live action in presentations of his work.
Keen’s films and performances emerged within the climate of literary happenings and ‘bomb culture’ at Bob Cobbing’s Better Books in Charing Cross as well as Gustav Metzger’s 1966 Destruction in Art Symposium. Recalling American underground films by Jack Smith, Ken Jacobs and Kenneth Anger, his work also resonates with Happenings, Fluxus and Viennese Actionism. Nothing stands still in his work, it is a constant process in which images and sounds evolve in quick succession through what Keen calls ‘violently disconnected and overlapping patterns’ of destruction, creation and accumulation.

Jeff Keen passed away on 21 June 2012. The presentation of his work in the Tanks is dedicated to his visionary creative spirit.
www.tate.org.uk/modern