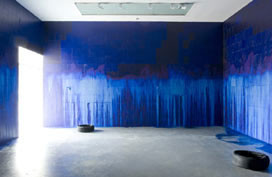 Latifa Echakhch
Speakers Corner 2008
© The artist, installation at Tate
Photo: Tate Photography
Taking its name from the area in Hyde Park designated as a space for free speech, protest and debate, Latifa Echakhch’s first exhibition in the UK explores themes of the individual and the state. It comprises two dramatic installations, each combining new and existing works.

The first space is an immersive dark blue environment, made by lining the walls with thousands of sheets of carbon paper. The title of this work, For Each Stencil A Revolution 2007, or A Chaque Stencil une Révolution, looks back to the radical protests of the 1960s, when carbon paper was used to print multiple copies of revolutionary statements and images. Echakhch’s use of this archaic material, which has become almost redundant in an age of cheap photocopiers and laserprinting, casts a melancholy light on the legacy of 1968, itself now forty years in the past. There is also a performance element to the work, as Echakhch splashes paint thinning solvents against the paper so that the blue seeps down, gathering in pools at the bottom of the wall. The performative element and deep blue may allude to the work of Yves Klein, while the resulting streaks are reminiscent of the surface of a Colour Field painting, drawing attention to the sometimes tenuous links between the political claims of abstract art and the radical politics of the 1950s and 1960s.

As an addition for this exhibition, Echakhch has placed a number of burned tyres in the centre of the room. As well as creating a contrast between different manifestations of civil disobedience, from ideological tracts and organised protest to destructive anger and spontaneous riots, there are formal links between the collapsed structure of the tyres and the dripped pools of blue.
The second space is dominated by Fantasia 2008, a dense network of bare flagpoles protruding from the wall. Without a specific flag to identify them, the poles suggest a generalised symbol for the nation-state; and the way in which they crowd and intrude upon each other can be seen as either the innumerable teeming arms of state bureaucracy, or the manoeuvrings of global politics. Raised aggressively like fascist salutes, the poles prevent visitors from moving freely, but also disrupt their spatial ability and sense of the room’s architecture. Here, the new element specially added by the artist is a box placed on the floor, reminiscent of the makeshift platforms used at Speakers’ Corner - a space for the individual from which an analytical, subversive or eccentric challenge to state power might be articulated.

Speakers’ Corner follows a series of works in which Echakhch has examined the traditions of liberty and protest espoused in Western democracies. In La Marseillaise 2005, she fed a perforated cardboard barrel organ score of the French national anthem, with its fervent revolutionary associations, into a portable document shredder. In Untitled (11 March 2005) 2005, she filmed the cleaning crew that followed closely in the wake of a street demonstration in Paris. Fliers and other detritus left by the protestors are swept away with military efficiency so that – within a few minutes – any trace of the demonstration has been erased. Echakhch has described the work as reflecting on the ‘poor heritage’ of the French Revolution and the events of 1968 in a city where ‘there are five demonstrations a week’.

Echakhch was born in Morocco, but her parents immigrated to France when she was a child. She has made a number of works incorporating materials such as tea glasses, carpets or couscous that provide her with a way of reflecting on her Moroccan heritage although, as she points out, they were never part of her everyday life in Paris. ‘They are as strange to me as any Westerner’, she has said. ‘I just show what I do with them. I can identify them as part of my own culture and, at the same time, they are completely alien to me. There are no tea glasses in my home.’ She has also engaged with the form filling and complex bureaucratic language that define the status of an immigrant in the West. Hospitality 2006, for example, consists of the text ‘Espace a remplir par l’etranger’ (Space to be filled out by the foreigner), which appears at the top of the application for a French residency permit. Removed from their original context and carved into the gallery wall, these words become a reflection on Echakhch’s own practice.

Latifa Echakhch was born in 1974 in El Khnansa, Morocco. She lives and works in Paris and Martigny, Switzerland.
www.tate.org.uk/modern