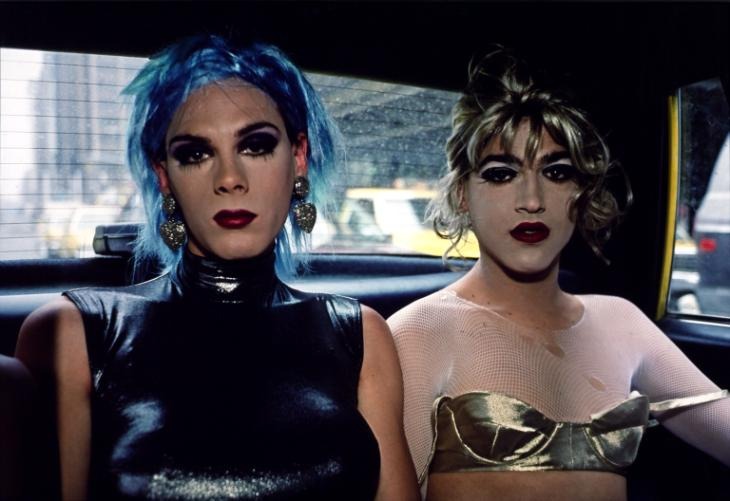 © Nan Goldin
Misty and Jimmy Paulette in a taxi, NYC 1991. Tate
Nan Goldin’s The Ballad of Sexual Dependency is a visual diary portraying the life of the artist and her friends through the 1970s and 1980s

Nan Goldin has said that photography saved her life. Since her late teens, she has used the camera to intimately depict her own life and those closest to her. Her photographs are uncensored and uncompromising. For Goldin, this reflects her desire ‘to leave a record of my life that no one can revise’.

Goldin was born into an intellectual Jewish family in middle-class suburbia outside of Washington D.C. When Goldin was eleven, her older sister Barbara killed herself. It was this loss that motivated her to leave home at fourteen. In the progressive free school she attended, she picked up a camera and started to photograph her friendships, some of which were lifelong. In 1978 she moved to New York where she formed a close bond with a circle of friends and lovers. Throughout the 1970s and 1980s she photographed this surrogate family - not from an outsider’s perspective, but as part of the group. These images now stand as a time capsule of a community and culture that would soon be lost due to the AIDS crisis.

She began to stage slideshow performances of her pictures, often with the people she portrayed in the audience. Goldin continually re-edited the selections and sequences. Over time, the project grew in scale and its reputation spread widely.

This display includes Goldin’s slide projection as well as framed prints, posters and a maquette made when she was working on the photobook. The Ballad of Sexual Dependency was named after a song in Bertolt Brecht and Kurt Weill’s The Threepenny Opera. Goldin described the work as capturing ‘the struggle in relationships between intimacy and autonomy... and what makes coupling so difficult’. It explores the human condition, including celebration and sadness, love and violence, life and death.