No Soul for Sale 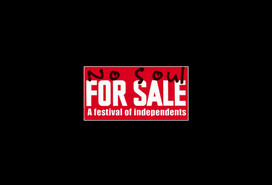 Held at X from June 24 through June 28, NO SOUL FOR SALE – A Festival of Independents will bring together the most exciting, creative and respected not-for-profit centers, alternative institutions, artists' collectives and independent enterprises from around the world that contribute to the international art scene by inventing new strategies for the distribution of information and by supporting a diverse cultural program.

X has invited 38 art spaces to travel to New York City to present themselves, their programs and the artists they support. With a gesture of radical hospitality, X will provide free space to all participants within the premises of the X building. The participants will be allowed to show whatever they choose, be it art, performances, publications, videos, or simply themselves. In addition to the exhibition space, X will make available to each participant, for a one-hour period, a dedicated performance area on the ground floor in which participants can organize performances, presentations, discussions and music programs.

Neither a fair nor an exhibition, NO SOUL FOR SALE is a convention of individuals and groups who have devoted their energies to keeping art alive. The Festival will be an exercise in coexistence: organizations will exhibit alongside each other without partitions or walls. As on the set of the legendary Lars von Trier's movie Dogville, participants will be assigned spaces that are only marked on the floor, creating a map of an imaginary city of art, where distances and hierarchies are abolished.

With associations and groups coming from Berlin, Milan, Dublin, Barcelona, Paris, Reykjavík, Hong Kong, Rabat, Trinidad, New York, Los Angeles, and many other locations, NO SOUL FOR SALE provides a unique occasion to foster creative exchange and to connect with international organizations that aren't usually accessible in New York City. With free entrance and a rich program of daily activities, NO SOUL FOR SALE will be a celebration of the independent forces that animate contemporary art.

In conjunction with the opening of NO SOUL FOR SALE, Mexico City-based artist MARTIN SOTO CLIMENT will orchestrate a performative sculpture titled Impulsive Chorus, realized with the assistance of the public. With more than one thousand beer cans to be consumed in the course of one evening, the performance creates an instant community: as beer cans are emptied, Martin Soto Climent will alter them with a slight crush and then place them on the floor in a formation.
Special thanks to Asahi.
www.tate.org.uk/modern