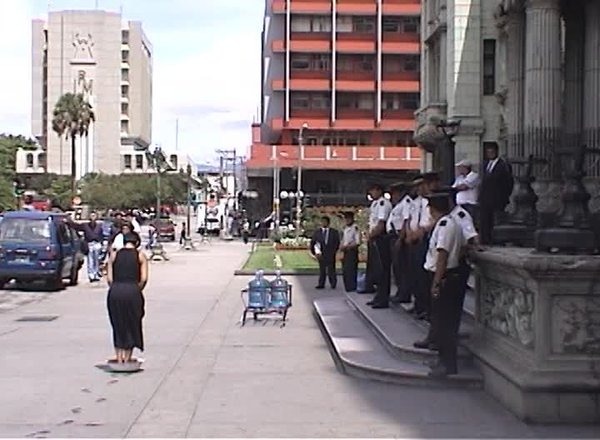 © Regina José Galindo
Who can erase the traces?, 2003
Courtesy of the Artist and Prometeogallery di Ida Pisani, Milan | Lucca
One of the most influential performance artists of her generation, Galindo makes work that reflects on power relations, often by using her own body

Who can erase the traces? is a performance staged on the streets of Guatemala City to address state violence and political tensions around a controversial presidential election.

This video documents Galindo’s performance that she carried out in 2003, in which she walked barefoot from the Constitutional Court to the Presidential Palace in Guatemala City. Throughout her journey she carried a basin of human blood. From time to time she dipped her feet in the basin then continued to walk, leaving her bloody footprints on the pavement.

Galindo created the performance after she heard that former military dictator Efraín Ríos Montt had been permitted to run again for the presidency of Guatemala in 2003, despite being stopped initially by the Supreme Court. Ríos Montt had been accused of a number of human rights abuses while he ruled the country and beyond, including the massacre, rape and torture of indigenous communities during the long-running civil war (1960–96). While he did not succeed in becoming president, the video documentation of this performance allows visitors to consider the political context of the work and to question who has the power to create and erase history.