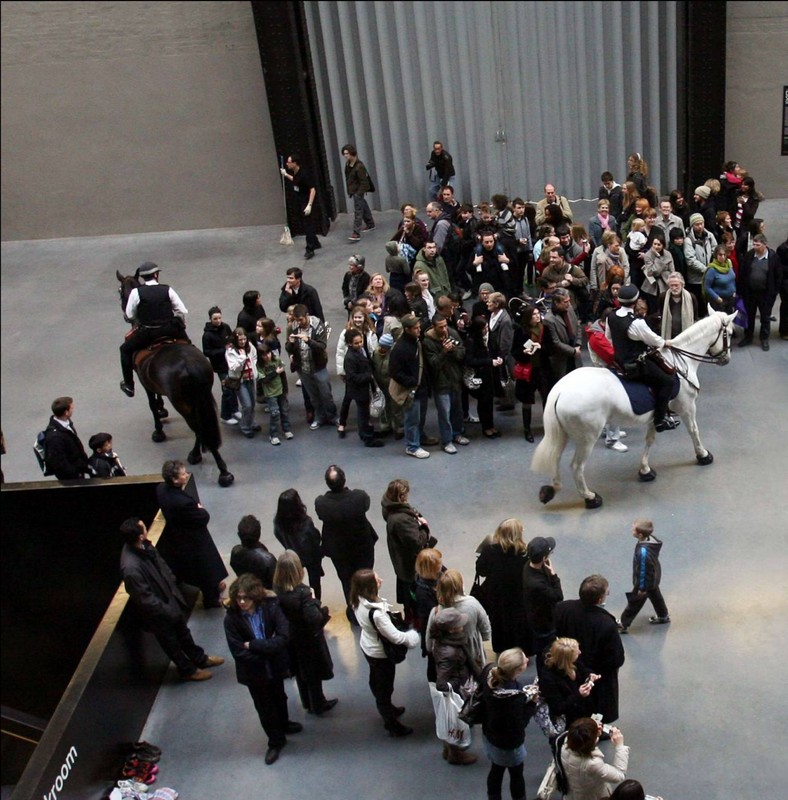 Tania Bruguera
Tatlin's Whisper #5 2008
Two uniformed mounted policemen, crowd control police technique, two horses (one white, one black or dark brown), audience
Purchased with funds provided by Alin Ryan von Buch 2009 Tania Bruguera
Tania Bruguera will take up residence in The Tanks with her ongoing art project, Immigrant Movement International – an artist-initiated socio-political movement that aims to explore who is defined as an immigrant and the values they share, focusing on the question of what it means to be a citizen of the world. Bruguera will involve artists, members of the public, immigration lawyers, politicians and charitable organisations in a debate around the political representation of immigrants and the conditions they face.

Bruguera is a key player within the fields of performance, interdisciplinary practice and activism. Her work is grounded in the act of ‘doing’ – she calls this ‘behaviour art’ – and her aim is to create art that doesn’t merely describe itself as dealing with politics or society, but that is actually a form of political or social currency, actively addressing cultural power structures rather than representing them. Bruguera is also extremely interested in the role of the museum as an active forum and the role of ‘useful art’ in society at large today.

Tania Bruguera (born in Havana, Cuba, 1968) currently lives and works in Queens, New York. Bruguera’s work is multifaceted and spans performance, event, action, film, installation, writing and teaching, alongside site-specific works including Untitled (Kassel, 2002) for Documenta 11 and Tatlin’s Whisper #5 (2008) at Tate Modern, alongside long-term projects such as the Cátedra Arte de Conducta (Behaviour Art School), an institution that existed from 2002 to 2009 in Havana, Cuba.
Immigrant Movement International was originally presented by Creative Time in collaboration with the Queens Museum of Art. The project is expected to run until 2015. Since then, Bruguera has developed a manifesto, launched an Immigrant Respect Awareness Campaign and instigated a day of actions by other artists around the world on 18 December 2011 (which the UN has designated International Migrants Day). In 2012, the project will add a new section in Mexico City, presented by Sala de Arte Público Siqueiros, to work with the subject of migration during the Mexican presidential elections.

Part of the series The Tanks: Art in Action
www.tate.org.uk/modern