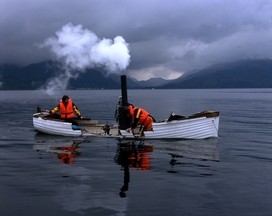 Simon Starling, Autoxylopyrocyloboros 2006
© courtesy the artist and The Modern Institute, Glasgow
Tate St Ives presents the first major exhibition in the UK of the work of Simon Starling since he won the Turner Prize in 2005. The exhibition draws on important works made in the last five years; almost all previously unseen in the UK. In addition, Starling will create a major new site specific work, commissioned especially for the show.

Employing video, film, slide projections, photography and sculpture, Starling’s work reveals rich, unexpected and complex histories, brought to light through his forensic - if sometimes elliptical- unravelling of an image, object or event. The exhibition’s selection of works, in the very particular context of rural Cornwall, emphasises Starling's long-running interest in the relationship and interplay between culture and nature, and his ongoing examination, excavation and transformation of the material world.

A major new commission will be created by Starling, further developing his interest in architectural spaces and their histories. He will recreate an exact, full size replica of a gallery space from the Pier Art Centre, Stromness - where he recently showed - in the spectacular curved sea facing galleries at Tate St Ives. Collapsing together two geographically disparate spaces - one at the northern most extreme of the British Isles and the other at the far South West -the work will appear as a kind of ‘ship in a bottle’, incongruously reconnecting two remote sites which share a strong cultural history and interest in post-war British art, and in particular the St Ives Modernists.

The exhibition will also include The Long Ton 2009, a sculpture featuring two rough-cut white lumps of marble suspended in space. The larger of the two stones, an import from China weighing one ton, is counterbalanced by approximately 250 kg of Italian marble thanks to a 4:1 ratio pulley system that allows the two stones to sit in perfect equilibrium. On closer inspection it is clear that the two stones have exactly the same form, the Italian stone having been precision laser-cut to exactly the same, although reduced, specifications as the larger Chinese stone. Despite its long voyage to Europe, the Chinese marble has a similar market value to the European stone one-quarter its weight.

Also on display will be his work Red Rivers, 2008 a video work which brings together the stories of two journeys made a century apart: the first a nineteenth century anthropological expedition into the Congo to capture and document the elusive and little known Okapi; the second a journey made by Starling down the Hudson River in a handmade strip canoe, culminating at the American Museum of Natural History in New York City where specimens of the Okapi finally ended up in a famous ‘diorama’. Taking the form of a series of still images, the video is as much a meditation on the fast disappearing processes of photography itself.

One Ton II, 2005 deals very directly with the material world. Making explicit the huge amounts of energy used to produce tiny quantities of platinum, one ton of ore, mined from the South African open cast mine pictured in the images, was needed to produce the five handmade platinum prints that comprise the work. In this way a simple but intrinsic relationship is established between the processes and economics of mining and refining platinum, the images of the site itself, and the chemical photographic process used in the production of the work. Inventar Nr. 8573 (Man Ray) 2006, is a slide projection that performs and documents a similar material excavation - this time at a microscopic level - on a photograph by Man Ray. The camera slowly zooms in on the photograph until it moves into the very surface of the print itself, finally revealing the individual silver particles that make up the image.

Continuing this interest in mining, excavation and geology, Starling will produce a new work, drawing on recent research into the Cornish China clay mines, emphasising the contemporary use of China clay in the paper industry as a glossy coating for fine papers.

British artist Simon Starling was born in 1967 and studied photography and art at Maidstone College of Art, Trent Polytechnic Nottingham and Glasgow School of Art. In 1999 he was the first recipient of the Blinky Palermo Grant, open to artists from all over the world. In 2005 he won the Turner prize. Starling lives and works in Copenhagen and Berlin. He is a professor of Fine Art at the Städelschule in Frankfurt am Main.
www.tate.org.uk/stives