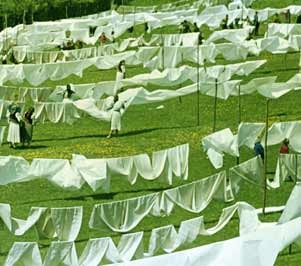 Ana Lupas, Humid Installation, 1970
Courtesy Ana Lupas
Ana Lupas figures among the most important international artists who, through a sophisticated process of creation, have continually expanded the understandings of Conceptual Art. Author of objects, textiles, environments, happenings, installations, performances, Ana Lupas has developed, starting from the mid-sixties, a complex nest of art interventions which have systematically aimed at dismantling the traditional structure of the artwork. Further, it is important to accentuate the seminal influence that Ana Lupas’ exceptional artistic personality had on a generation of Romanian artists in the 1970s.

Located between the spaces of art and life, the work of Ana Lupas is the result of a long process of elaboration and conceptualization, which starts from a self-questioning of how art must be communicated and displayed. The directions and strategies of her artistic practice highlight the fact that the gesture of art/ist must be experienced by the spectator and be made immediately available to him. Aspiring at a re-connection with the natural, at a rehabilitation of a universal harmony, her performative installations and objects acquire utopian feature and monumental presence.

The exhibition at Galerie im Taxispalais is focusing on two extensive outdoor installations produced during the mid-sixties and beginning of the seventies, respectively: “Solemn Process“ (1964) and “Humid Installation” (1970).

In 1970 Ana Lupas created the first large “Humid Installation” in Mârgău village, Transylvania. Amplifying an older work she produced in the Grigorescu district of Cluj in 1966, this ephemeral installation was realized with the help of 100 inhabitants of the village. The artistic intention adds to the domestic gesture of hanging the laundry a new function and connotation. Dozens of lines hung with wet, white linen were drawn over the whole of a hill, modulating the space, aiming to an infinite dimension and to a global natural continuation. The symbolic process of purification (cleaning), accomplished through an aesthetic act, functions for the artist as social therapeutics.


Situating in her practice close to the work of an ethnologist, Ana Lupas usually makes appeal to visual references and practices belonging to a traditional culture. Already in 1964 Lupas created the work “Solemn Process“, minimalist objects manufactured of straw in various dimensions: steles, wreaths and circles which were installed and arranged outdoors and inside the village’s houses. Involving the people in the production of these objects, “Solemn Process“ embodies a traditional ritual whose solemnity generates not only the production of formal structures beautiful in their representation which melt within the natural surroundings, but also a new reconsideration of the conditions of creation of the art object.

In her later process-related steps Lupas transformed some of her early works by conveying them into new materials. For example, she created linen sheets out of bitumen-saturated textile, paper or aluminum; for her straw objects she produced closed, sculptural plate repositories which she entitled “cans“. Lupas shows a space-filling installation of these sculptures whose interior is not revealed anymore.

The process of “conservation” and “restauration” emphasises questions of permanence of the artwork, referring either to its physical condition or to its discursive, interpretative condition. In her attempt to conserve early works, Ana Lupas accentuates the fact that the rapport of art with itself is essentially historical and that the process of translation and restoring the historical pieces can be read as an attempt to fix and/or to rethink a process.

Ana Lupas was born in Cluj in 1940. She lives and works in Cluj.


Curated by: Alina Şerban in collaboration with Silvia Eiblmayr

An exhibition catalogue is being published.