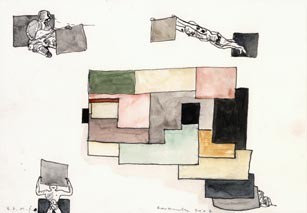 Ernst Caramelle is one of the most important representatives of international Concept Art. In his works, he responds to media as diverse as drawing, mural painting, installation, photography, video, and language in order to investigate a pivotal aspect of art: the relation between the idea and the artistic product. Caramelle’s conceptual working method is oriented towards the creation of new, dynamic relations between objects, concepts, spaces and images by means of quite different perspectives, which he incorporates on intellectual, visual, linguistic and technical-material levels.

Since the very beginning, Caramelle has been concerned to raise questions in his works in a productive way, but not in order to provide seemingly correct answers to them. He rather seeks to maintain openness in the sphere of art – in the sense of a cognitive process, whereby the position of the artist and that of the viewer are continually at stake, like the concept of the artwork and of art itself. The aim is to facilitate a view of the − literal and metaphorical − blind spot that has evaded our perception and our insight, and to introduce perspectives that enable us to reflect on the process of observation itself. Caramelle starts out from precise ideas and concepts: he has developed an open system to formalise these, which allows him to investigate different contexts, shifting and often questioning them ironically, and so creating new networks of relations.

In 2006, Ernst Caramelle showed his “printed matters 1974 – 2006” in a large-scale exhibition in the Tiroler Landesmuseum Ferdinandeum; here, he makes a conceptual investigation into the Galerie im Taxispalais and its rooms. He has designed mural paintings extending over two floors especially for the gallery space.

Usually, mural paintings are produced for a site from which they will have to disappear once again, i.e. under a new layer of paint that returns the exhibition space to its previous state. These mural pictures, which are realised in a time-consuming process – watercolour is applied to the wall and then partially washed off –, take up specific structural parameters of the space. However, Caramelle’s statement “(proportions lend wings to ideas)” does not refer to the proportions of the rooms alone, but also to another important factor in his work; the proportions of periods of time, which come into effect here.

For, in this context, the production process of his conceptual painting confronts its own disappearance, which Caramelle deliberately incorporates into his work as a structural element. Forms of documentation of the mural paintings, which represent a conceptual aspect of the work, are also involved in this process. Caramelle is producing a publication of his mural paintings in the Galerie im Taxispalais.

Caramelle has designed another room in the gallery together with Monika Schwitte, who is showing her films in a parallel exhibition. Here, he will be presenting project studies, drawings, Gesso Pieces (“Quasi Paintings”) and a new video work.

Ernst Caramelle was born in Hall in Tirol in 1952. He lives and works in Frankfurt, New York and Karlsruhe, where he teaches at the State Academy of Fine Arts.

A publication is appearing in conjunction with the exhibition.