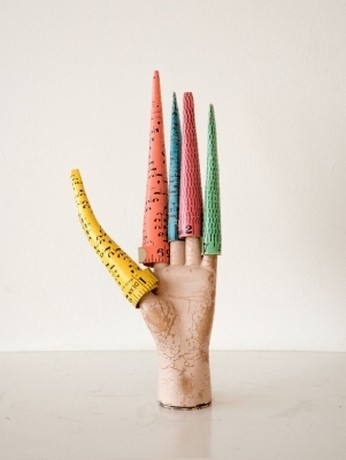 The Galerie im Taxispalais is showing the first comprehensive retrospective in Austria of work by Czech-Canadian artist Jana Sterbak (*1955 in Prague, lives and works in Montréal). Examination of the body and identity, materiality and the processual plays a key part in Sterbak’s multifaceted oeuvre. In her sculptural, performative, photographic and film works she generates both direct and indirect references to the conflicts of the human subject in the context of contemporary society, testing its extension as well as limitations, indicating its vulnerability as well as resilience, and sounding out the transition from the intimate to the public sphere. Her chosen materials are often ephemeral and transformative, such as the ice that forms the slowly melting chairs of Dissolution (Auditorium) (2001), or the pieces of meat sewn together to make a dress in the much discussed work Vanitas: Flesh Dress For An Albino Anorexic (1987) – both striking metaphors of physical, but also of social processes. While the materials of Sterbak’s works carry decisive symbolic significance, they are also linked to everyday experiences, and touch the viewer on an explicitly personal and sensitive level. At the same time, subversive and ironic-humorous echoes resonate in Sterbak’s works, helping her to uncover social conventions, constraints and role clichés.