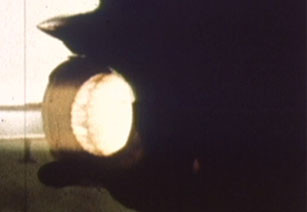 
Monika Schwitte works on the interface of film and painting. She blurs the boundaries of the film medium and crosses over them by intervening by hand into found footage of diverse origins. In a time-consuming, step-by-step process, she uses painterly elements – marks and streaks – in order to cover or emphasise specific colour tones on the individual frame and to concentrate pictorial elements. In addition to this, she works with the celluloid material directly by making perforations or cuts into it; both methods serve her aim of directing the projector’s light onto the screen in precisely the way that she wishes. Cutting technique is a further process by means of which Schwitte lends complex rhythmic structures and pictorial sequences to her short films.

“I recommend to the viewers of my films”, Monika Schwitte says, “that they simply watch, without wanting to understand anything, and go on an optic trip with these silent, often very rapid images. Colours, people, animals, plants and rivers, even perforation holes and many beautiful but invisible images play a part in my films, which appear both narrative and abstract, without telling a story at all.
Ultimately, I was led to paint on my material by the idea of directing the light on its way to the screen, by the fact that I am the one who determines at which point and just how the projected light passes through the image. Painting with brush and black ink also turned out to be the ideal method of erasing unwanted pictorial content.”

In her exhibition in the Galerie im Taxispalais, Monika Schwitte is showing a selection of her films, which are always silent and made – with one exception – on 16mm film, including Untitled (1989), the first film that she painted onto continuously, frame by frame. It will also be possible to see Self-fulfilling Prophecy (1994) and Untitled (1999), for which she used film strips from television series. “On the one hand – rather scanty material, but again, I had all that I needed; colours, movement, time.”

Her latest film Anagram (2006) is being presented to the public for the first time in the exhibition. Schwitte spent three years painting on this 35mm film, which – at 26 minutes – is her longest, and another two years on the montage.
In the text he wrote for the exhibition catalogue, Klaus Theweleit writes: “So what do we see when Anagram is played through? When it is played through the projector, we see primarily the jumps between the images. The black track changes from frame to frame; we see this constant change and only rudiments of the image itself. No eye is capable of seeing twenty-four images per second. Our perception of complete images and people in the cinema is based on this fact. From the cinema, we are accustomed to ‘a single image’ lasting several seconds and thus coming together to form an entirety. In older cinema, there were seven to eight seconds per take; today the average duration of a feature film take has shrunk to just under two seconds. Our capacity to perceive and process has become four times as fast, but no person can see 24 different images per second, which is the reason for the flickering: the jump from image to image, made visible to our eyes by Monika Schwitte’s interventions, runs or even races towards us, right through us – it jitters, flickers, glimmers in jumps – or past us, if we close our overtaxed eyes and/or look beyond the images.”

Monika Schwitte has designed another space in the exhibition together with Ernst Caramelle, who is transforming some of the gallery’s rooms with his wall paintings in a parallel show. Here, she presents sketches, drawings and film stills on acrylic glass.

Monika Schwitte was born in 1956. She lives and works in Frankfurt.

Catalogue
An exhibition catalogue including texts by Klaus Theweleit and Monika Schwitte is being published by Stroemfeld / Roter Stern.