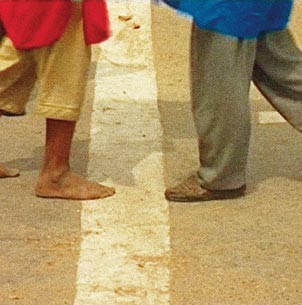 Amar Kanwar, A Season Outside, 1997, Videostill 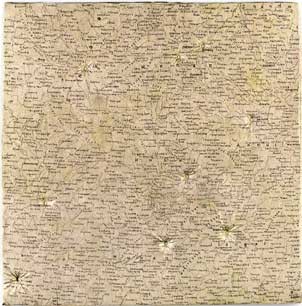 
The exhibition project deals with the theme "border" from various aspects and artistic approaches. A statement from the artist Šelja Kameric serves as both title and motto, as its ambiguous rhetoric addresses actual conditions and also the desire to overcome them at the same time.

In "There is no border..." 24 artists address systems of exterior and interior spaces that are determined not only by concrete and material borders, but also by imaginary and mental borders. What all of these systems have in common is that they refer to social and territorial structures that involve (in the broadest sense) situations that are specific to power. The "border" is articulated in highly diverse, often fictive forms of transgressions and movements, of in-between spaces, crossings or dissolving. It can thus manifest itself as a cartographic line of separation, as a real wall or fence – e.g. of a prison – or in a surveillance system or in the bureaucracy of visa application of an embassy. In its different formations the "border" becomes a central theme of social processes that the artists meet with activism, with dramatic staging, with photographic registration, with irony or filmic fiction.

Dragos Alexandrescu, for instance, "portrays" cars secured behind bars and their social status in Romania. Narda Alvarado stages an absurdly humorous barrier in the street traffic of La Paz by having the "Olive Greens", the traffic police, block the street for an absurd action. Heath Bunting implements another route in his long-term project "borderXing" (Border-Crossing), crossing the border in an unguarded location, this time on the border between Hungary and Austria. In her pencil drawings Sonja Gangl traces especially apt and symptomatic closing scenes ("The End") of Hollywood films. In three different works Mona Hatoum creates subtle metaphors for migration and border conflicts.

In the "East Art Map" the group IRWIN creates a new map of art historiography, opening up long neglected areas of the art of Eastern Europe. Šelja Kameric chose San Marino and Cyprus as locations for her "borders" theme. Amar Kanwar's film "A Season Outside" deals with a remote border town between India and Pakistan in intensive images.

Gülsün Karamustafa shows three women talking about their experience of prison in Turkey as political prisoners. Guillermo Kuitca paints a square segment of a map of China, a fragment of the world in the form of language poetry that calls to mind a piece of furniture at the same time. With "Village" Yaron Leshem presents a fake Palestinian village that serves Israel as a military training ground and that he also uses as a fictive TV reporter as a backdrop for a war report from Iraq. Ján Mancuška draws concrete "borders" right through the exhibition space, a rubber band with writing on it stretched at eye level.

MW Democratic Movement (Monika Marklinger & Johan Waerndt) investigate "The Politics of Color", the division of the world into the three television systems PAL, NTSC and SECAM. Ralo Mayer explores the border region east of the Neusiedlersee, a lake at the eastern border of Austria. In the video "Agente apri" Walter Niedermayr and Marina Ballo Charmet follow the path of two small children living with their mothers in a prison in Milan, who are led once a day into the outside world.

Tanja Ostojic stood in line for hours with visa applicants in front of the Austrian Embassy in Belgrade. Eva Schlegel and Eva Würdinger photographed the recently abandoned youth prison in Vienna-Erdberg. Schlegel shows a seemingly abstract photo of the prison archive, Würdinger documented the graffiti scratched into and drawn on the walls in numerous photos.

In "Map of the World" Ilya Trushevsky takes an ironic look at the globe and politics. He projects a video onto a world map with flies walking along the border of the former Soviet Union. Alexander Vaindorf's New Romantics wander through a mountain landscape consisting of a montage of images from Hollywood films. Donovan Wylie shows the (former) reality of the watchtowers along the border in the hills between Ireland and Northern Ireland highly secured by the military.

For his film "Repetition" that was shot in Warsaw Artur Zmijewski repeated the conditions of the famous "Stanford Prison Experiments" from 1971, in which volunteers acted as prison inmates and others as their guards.


"Borders," writes Karl Schlögel, "prove to be 'preferred locations', in which mixing processes, transfer processes, amalgamations take place, and which offer a point of insight of a special quality." The "border" is articulated as a scene of displacements and dislocations, from which "something new emerges".
www.taxispalais.art