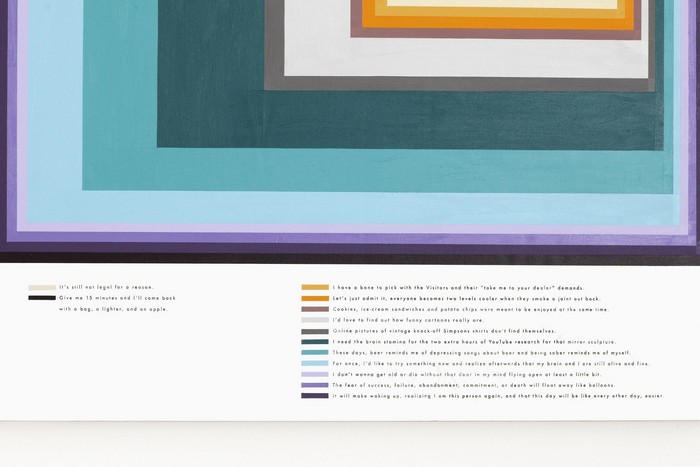 © Andrew Kuo
Detail from Andrew Kuo, The More You Know About Me, The More You'll Think Twice Before Calling/I'd Be More Tolerable If I Smoked Weed Because..., 2011
acrylic and carbon transfer on paper mounted on wood panel
diptych: 30 x 24 inches each
ANDREW KUO
My List of Demands
31 March – 30 April, 2011

My List of Demands is Andrew Kuo’s second solo show at Taxter & Spengemann. The artist has created a body of work that is as visual as it is textual, direct, indirect, romantic, sarcastic, entitled, and self deprecating. His works on paper, paintings, photographs, and sculptures are rendered outpourings of his mixed emotions, indisputably all about him however disarmingly universal.
This exhibition is populated by several strains in the artist’s practice and his tragi-comic gift for storytelling pervades all. In his foot noted “chart” paintings on paper, Kuo quantifies his personal life into info-graphics whose forms are more abstract than representational. His confessional style takes its cues as much from pop music as Sophie Calle, with one eye on the now-conventional exhibitionism of social media. Kuo’s mind is a vortex of longing, hardwired with exceptional organizational skills and no shortage of criticality. The social landscape is pocked with land mines, and his work addresses these frustrating interactions, deflecting at least some of the loathing from the self.
Doleful syntax is replaced by paintings and photographs of flowers, a potent symbol of romantic aspiration and mourning: These text-less works consist of a series of iPhone pictures printed, mounted, and transformed by meticulous non-annotated circle graphs applied to their surfaces, suggestive of a face. And for some time the artist has distilled the matrix of his feelings in a series of gesturally rich, carefully rendered paintings of flowers, in full bloom, suffocating in plastic wrap, or displayed on a table or desk.

About the artist:
Andrew Kuo was born in 1977 in Queens, and lives and works in New York. He received his BFA from the Rhode Island School of Design in 1999. His work is being shown in upcoming exhibitions Artists Tell Stories (Mostly About Themselves), Scottsdale Museum of Contemporary Art, Scottsdale AZ and New York Minute, Garage Center for Contemporary Culture, Moscow, Russia. Notable past exhibitions include This is Killing Me, Mass MOCA, North Adams, MA, and solo exhibitions at Artists Space, New York and at Franklin Art Works, Minneapolis, MN. A comprehensive catalogue of the artists work was published by Standard/Damiani in 2010 and is available for purchase. His work will be included in the exhibition catalog for Talk To Me, opening this summer at MoMA.
www.taxterandspengemann.com