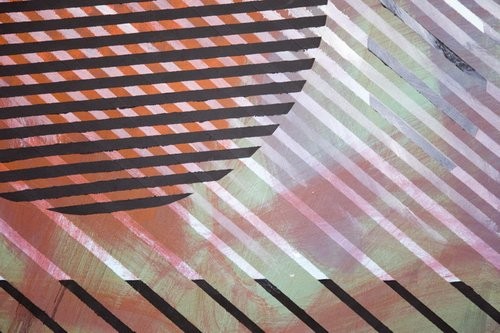 This exhibition brings together four artists who utilize strategies of formal reduction; of exposing and slightly perverting the structural methodologies of a particular medium. The conventions of video art, film and television; traditions of still-life and portraiture; and various strategies of Modernist painting and sculpture are distilled here into a potent essence, but also evoke the emptiness of the stand-in or the null set.
Uri Aran’s video Multicolored Blue, 2010 manipulates the conventions of the sitcom: the bland domestic interior, the inane laugh track and the mugging characters, but these tropes are seemingly out of sync with one another and lack the mooring of a linear narrative. A swinging Duke Ellington soundtrack punches up the proceedings and adds a veneer of glitz, but little in the way of explanation, forcing a viewer to make assumptions and projections about the structural relationship between the characters. As an artist interested in systems of learning and control, Aran makes a case for the elasticity of meaning and the power of music and the moving image to influence and manipulate.
Nancy de Holl’s paintings of books wearing hats and positioned in styled settings, reconfigure the still-life/portrait tradition by making the inanimate and mundane object an anthropomorphized and resonant subject. The books’ form and content parallels that of the fictive and theatrical flatness of the picture plane, walking the line between depiction and signage. Painted from the artist’s arranged studio photographs that echo her earlier forays into still-life, these new works further mediate and heighten the implied artifice of their subject.
The historical conventions and current complications of abstract painting are the province of Jaya Howey’s newest body of work. In some works, meticulously layered, optical stripes enforce order over looser washes of color, while others are quickly executed “roller paintings” making use of unevenly loaded industrial paint rollers to produce a loose, silk screened effect. Recognizable imagery also muscles it’s way into the pure abstraction in the form of a cane (a wry allusion to the crutch of imagery?) or a smiley face, poking holes in the seriousness of the practice.
Daniel Lefcourt’s new series of wall-mounted works, Active Surplus, 2010 epitomizes the selfconscious condensation of artistic practice. Fragments, remnants and echoes of earlier Lefcourt works have been reduced in scale and ambition to vacant images and empty signage--place-holding units that decorate an elaborate hanging-system that has taken over, becoming the dominant element of the work. The mechanism of display has usurped both the form and the content of the work, leaving just enough ordered traces of the “artwork” to be legible as such.

Uri Aran received his BFA from The Cooper Union in 2003 and an MFA from Columbia University in 2007. He will be included in the forthcoming Sculpture Center exhibition Knight’s Move, and has an upcoming solo exhibition at Mother’s Tankstation, Dublin, Ireland and had a 2008 solo show at Rivington Arms. Recent group exhibitions include: The Living and the Dead, Gavin Brown’s Enterprise, New York; The King’s County Biennial, Brooklyn, NY; TIME-LIFE Part II, Taxter & Spengemann, New York; The Circular File Channel, Curated by Josh Kline, PERFORMA, New York; PRUESSPRESS, Ritter/Zamet Gallery, London; The Fuzzy Set, La><Art, Los Angeles; and Odeon, Ritter/Zamet, London.

Nancy de Holl has had two solo exhibitions at Taxter & Spengemann as well as a solo show at The Priebe Gallery of the University of Wisconsin at Oshkosh. She received her BFA from the School of the Art Institute of Chicago in 1999 and an MFA with a specialization in photography from the University of California Los Angeles in 2003. Recent group exhibitions include Out of Order, Andrew Edlin Gallery, New York; Monitaur (in collaboration with Frank Benson), Aspen Art Museum, Aspen, CO; Palomar: Experimental Photography, Marvelli Gallery, New York; Offset, curated by Matthew Spiegelmann, Mt. Tremper Arts, Mt. Tremper, NY; Linkage, Museum of Contemporary Art Detroit, MI, The World is All, This is the Case, Hudson Franklin Gallery, New York.

Jaya Howey has had three solo exhibitions at Taxter & Spengemann. Howey earned his BFA from
the Museum of Fine Arts, Boston in 1999 and his MFA from Columbia University, New York in 2006. He currently has a solo exhibition entitled The In Acts Out at Marginal Utility in Philadelphia, PA and was recently included in Besides, With, Against, and Yet: Abstraction and the Readymade Gesture, Curated by Debra Singer, The Kitchen, New York; Union Square, Taxter & Spengemann, New York; and On From Here, Guild & Greyshkul, New York.