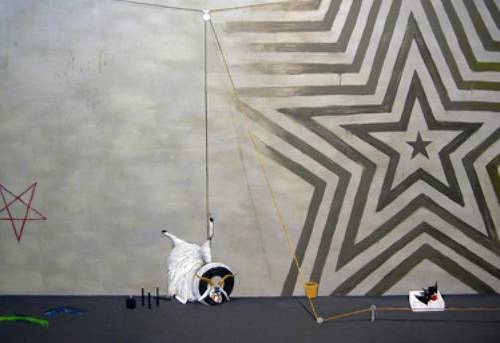 WAYNE ATKINS
Wayne Atkins makes paintings of exhibition spaces: the studio, gallery, and museum. Atkins fills his rooms with potentially realizable exhibitions comprising artworks of his own making exclusively rendered in paint, illustrating a tension between painting and sculpture, flatness and depth, reality and fantasy. The surfaces of the exhibition spaces themselves become an active participant, as each becomes a location for abstraction, filled with drips, drabs, washes, and other ‘moves.’
Goat (all works 2006-07) features Robert Rauschenberg’s Monogram in the center of a Satanic tableaux—a headless bloody bat on a pedestal in front of a Sol LeWitt star drawing, adjacent to a pentagram scrawled on the wall, and so on, all seemingly joined together by an elaborate and partially seen system of pulleys—the goat’s leg is caught up in the rope. The rig seems a symbol of Atkins bizarre and frankly wrong, contextualization of the most famous of all the Combines, hinting that all of art history and contemporary art are but marionettes in Atkins’ repertoire. Goat also calls into question curatorial practice, suggesting that all interpretations are indeterminate.
Grid focuses on one grid-like element seemingly afloat in a milky white space. Some lines are highly rendered rope, or wood, while others are just swaths of paint. Upon closer inspection it’s clear that the structure and its shadows don’t correspond. A line that seemed to be delineated in one space all of a sudden seems like it was painted directly on the wall the so-called object floats in front of. Here is Atkins’ best example of spatial disorientation coupled with a series of seemingly accidental painterly moments. The layers of pentimenti and worked-over surfaces force the wall into the role of a Robert Ryman painting. This has the contradictory effect of flattening what had formerly been a three-dimensional, illusionsitic space.
In the zero gravity of Atkins’ universe a lighter hovers above a pedestal in a gallery littered with leaking gas cans. It seems the lighter would not be a worthy art object were it not for its ability to fly. Burn is perhaps the most dichotomous of Atkins’ interiors as it’s both boundless and The End. The artist could just as easily use the gallery for kindling as he could for inspiration.
Wayne Atkins had a group of earlier works in the upstairs gallery of Taxter & Spengemann in May 2006. Atkins is currently pursuing his MFA at CalArts,, where he will graduate this Spring.

CORIN HEWITT
Corin Hewitt presents Magic Without Tears (Yellow, Yellow, and Yellow) (2007), a series of three startlingly unnatural, acrid-yellow casts of splintered plywood in the upstairs gallery. Hewitt has transformed material on the verge of obsolescence; reimagining the nature of perception and memory as in previously exhibited works Reign (2005), a bronze cast of his 98-year-old grandfather's battered office chair, and Legacy (2006), a monumental rainbow made of street sweepings. The ragged plywood panel that served as the inspiration for this piece was one that the artist had watched decay over a period of years against the side of his childhood home in Vermont.
Each panel of Magic Without Tears (Yellow, Yellow, and Yellow) has a surface that is chipped, scarred, bowed, and severely cracked across its middle. This break allows the plywood to balance on the weight of its fissure, sitting improbably upright with a checkmark poise that contradicts its beleaguered surface. This tense posture also allows the viewer to notice the backs of the panels, which are essentially blank, having been cast by Hewitt in relief. The edges of the original plywood rise up against a ground of the material spilled over from the casting process, which the artist has chosen to leave intact. The panels are an interpretation—or impression—of the original object, not straightforward replicas.
Magic Without Tears (Yellow, Yellow, and Yellow) began as a triptych of three virtually identical casts, but Hewitt went on to hand-paint bruises in different stages of the healing process at varying places on each. One bruise conforms to a concavity created by the artist head-butting the panel in its still-pliant state, just as it was pulled from the mold. Another bruise outlines a topographical canyon created by the center fracture.
Hewitt then completes and complicates his investigation by laying a photograph of a portion of one of the sculptures on the surface of the middle panel's bruise. This image is shifted slightly to create an uneasy combination of tromp l’oeil illusionism and a documentation of the object underneath.
While it would be easy to see the head-butt and bruises as symbolic of the artist’s struggle with his past or his practice, the aggressively synthetic material and color of the work distances it from such organic concerns. Magic Without Tears (Yellow, Yellow, and Yellow) locates a very personal psychological relationship within a single, specific object, and connects it to a series of larger formal questions about sculpture. The viewer is confronted with a subtly antagonistic conversation that never completely comes to a close.
Corin Hewitt’s first solo exhibition at Taxter & Spengemann was in April 2005. Since that time he has been included in Wanas 2006: 8 American Artists at the Wanas Foundation in Malmo Swedem; Material World, The Public Art Fund at MetroTech Center, Brooklyn; The New City: Sub/Urbia in Recent Photography, Whitney Museum of American Art; Atlas of the Unknown, curated by Tina Kukielski, small A projects, in Portland; Bebe le Strange, at D’Amelio Terras Gallery, New York, and Suspended Narratives, curated by Maureen Mahoney, Laura Reynolds Gallery, Austin.
www.taxterandspengemann.com