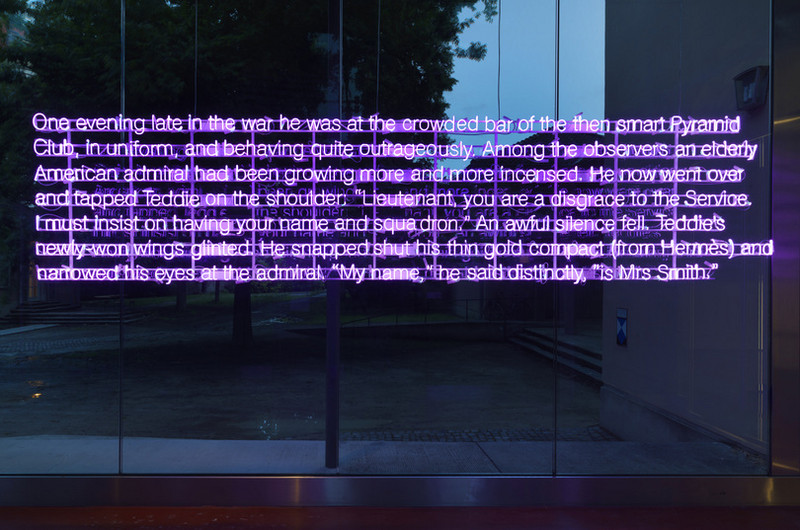 In The What If?... Scenario (after LG), Wyn Evans literally sets the stage for a multitude of potentialities, contingencies, and uncertainties about given conditions and structures of what we see and what we know and how we come to know without ever solidifying his position into a positivist affirmation but rather remaining suspended in "weak connections". His luminous works, collected by TBA21 over 10 years and here shown together for the first time, unfold a spider web of artistic, literary, and referential signifiers, waiting to be glimpsed and grasped by a viewer who cannot but become an active performer in a play of multiple meanings and speculations. Wyn Evans’s artistic strategy interrupts our habitual access to the world of objects and meanings by disrupting our associative and (re-)cognitive patterns, locating gaps, hinting at subliminal associations, anecdotal slippages, contingencies, and errors in translation.

Cerith Wyn Evans, however, uses almost exclusively the "already written", stages it as event, "queers it", displaces it and makes it truly contingent. Working mostly with film, light, communication technologies such as Morse code, literature, and quotations, he complicates the materiality and structural aspects of coded communication and text at the threshold of installation. Exploring and exploiting the limits of vision, the reticence of the retina, and structural cinematic experiences, he plays with the viewers’ psychophysical condition, approaching his or her sensorium in multiple audiovisual languages that are waiting to be translated, decoded, and interpreted within an open horizon of meanings without ever fully losing control of the frame of interpretations.

In the tradition of TBA21’s first three shows at the Augarten, which operated in essentially monographic yet specifically dialogical form and understood as artistic encounters, the show presents the second iteration of Cerith Wyn Evans’s collaboration with the German artist Florian Hecker,
No night No day (2009), first shown at the Teatro Goldoni on the occasion of the 53rd Venice Biennale. The work, a junction of two independently produced parts, can be seen as a materialization of the "third mind" as established by William S. Burroughs and Brion Gysin: a third space that is created through the encounter between two minds and that results in an unforeseeable and not simply additive but rather potentiated realm, an extrapolation of the two voices. No night No day will be presented for the first time in an installation version, adapted to the spatial configuration of the Augarten.

TBA21 began collecting Wyn Evans’s work very early in the foundation’s history, resulting in a unique assembly of the artist’s oeuvre and as such an array of pointers to questions and propositions that can be posed and poised together at TBA21–Augarten.
www.tba21.org