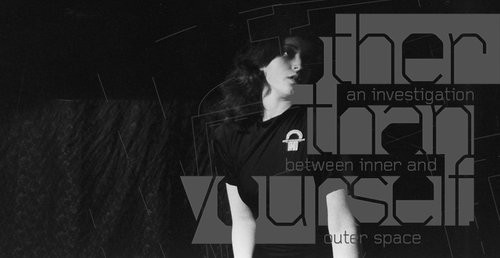 OTHER THAN YOURSELF
An Investigation between Inner and Outer Space

The personal space provides us with a location in the world, by marking a barrier that distinguishes and can protect the individual from the outside world. Privacy can represent a disengagement from others, a nonrelatedness, but also rests upon the paradox that this space must be provided by others, that it relies on the recognition and affirmation by others (audience, viewer). It is part of a repertoire of a person's protective and communicative measures, a “potential space” that allows for the creation of shared realities, realities that belong neither to the self nor to the other.

Referencing privacy as space of refuge establishes a form of territoriality, a sense of borders, an inside that does not necessarily form a “container”; a space that is neither external object nor internal experience, but is constituted in terms of actions and meanings. Space in this context is understood as practice: the meanings that are attached to places and the spatial order are not fixed or invariable but are invoked in the context of usage and language and are most notably defined by the position of the viewer.

Intimacy can be spatialized as a private domain that individuals literally carry around with them wherever they go, a “portable territory,” as can be seen in The Bag, a work by Emanuel Danesch and David Rych that takes the form of a body bag, allowing those who carry or wear it to feel protected and in control of their bodies. Ján Mancuška's I asked my wife to blacken all the parts of my body, which I cannot see captures the act of a woman, or wife, painting her husband black in all the places of his body that he can't see without a mirror, or in reflection. The issues of private vs. public space are here visually played out as the "spaces" or parts of one's body that are public, are exactly those that off limits to one's own sight. Paul McCarthy transforms public figures into puppetish characters whose actions are reduced to instinctive bodily enactments such as aggression, self-destruction, obsession, and helplessness.

For Cindy Sherman, as for Salla Tykkä, self-portraiture is a means to analyze and negotiate multiple and shifting cultural identities. In 1977, Sherman began a series of photographic works in which she staged herself as female characters from Hollywood B movies of the 1950s and 1960s. In her works Tykkä addresses the perplexities of adolescence, expressing an inner world of sexuality, pain, awakening, and longing: a young woman at home, covering herself with fur; her silhouette behind a sunlit curtain. Maurizio Cattelan’s series of fictional portraits represent in a sense a suffocation of the self, as the relationship between the psychological space of the individual and his representation is undermined by the missing reference to the original model. Jonathan Horowitz investigates and confuses the projected/medial views of the popular figure Kate Moss by putting a (self-)projection of the visitor at the center of his Daily Mirror. The visitor becomes an archaeologist searching for the traces of the remains of the familiar—on/through him/herself. The idea that reading could itself constitute a privileged part of the notion of privacy was raised by the Romantics with their cultivation of Innerlichkeit as a process of inner healing. In Janet Cardiff’s The Walk Book, reading and being guided by an alluring, prosodic voice create a completely absorbing experience in which now and here dissipate into multiple fictionalized layers of time and space.

The home embodies a history shared with other members of the household or with other/former inhabitants; the space then becomes stratified, contested, temporalized. In Amos Gitai’s film trilogy House, story and history meet as the private destinies of a house’s successive inhabitants trace the intertwined loops of Palestinian and Israeli history. In her architectural installation Monika Sosnowska carries ad absurdum the normative classifications of Polish apartments under socialism. She leaves the visitor in a state of visceral confusion, located on the blurred border between physical and mental disorientation—a futile attempt to both represent and escape the system. Here space is conceived as the unhomely house inhabited by the repressed and understood as imprisonment/trap/memory-loaded psycho-sculpture, in which the psychological subject—in presentia or by inference—is at the center of the representational discourse. Sanja Iveković’s Triangle, in which the artist simulated intimate acts on her balcony while a presidential motorcade passed by on the street below, reveals the difficulty of defending private space against the totalitarian order.

The studio in its largest sense serves as an encapsulated space/refuge for artistic experimentation, excluding viewers from the moment of creation and permitting access only at a later stage of publicness. Here the artist is also the subject of action and becomes the interface between already informed, never separated, but always interfering/overlapping/intermixed “outer and inner realities,” while artistic practice becomes the tool/medium for negotiating multiple relationships. Roman Signer documents his ephemeral, mostly impish actions with film and video, at times exposing himself to dangerous or borderline situations. Dennis Hopper performs a cataclysmic self-explosion with a “Russian Death-Chair” that would symbolize the end of an era of drug intake and psychodelic expression. Slaven Tolj uses light bulbs assembled on a cable wrapped around his naked body and unscrews and extinguished them one by one, remaining in the end in darkness, in silence. Sergio Prego also films his own actions and translates his experiences and self-awareness into experimental techniques that make it possible to freeze or extend short moments and events thus making them visible. Hans Schabus excludes the public altogether, gliding through the darkness and refuse of Vienna’s sewer system in a homemade sailboat. Pipilotti Rist’s artistic practice can be understood as a constant remix, as she reedits and reinstalls projected images, sounds, objects and her own work. In Related Legs (Yokohama Dandelions), she drags the visitor into a maze of transparent curtains hung in a dark space lit only by the projections that wander over its surfaces, fragmenting themselves in the process.

In the work of Boris Ondreička the provision of furniture and structural features (walls, ceiling) appears to personalize the space, dividing it into small territories for particular functions. These fixtures provide for the coherence and continuity of the self, a homeostatic condition of stability within the destabilizing anonymity of the everyday. Similarly, in Jenny Holzer’s Arno—poems carved into marble benches—the all-too-private, the ineffable, is literally/physically inscribed into the space/body. The layers of privacy that ensure the territories of the self attain greater complexity, however, when placed within the layers of outer space. In David Lamelas’s and Mario García Torres’s filmic works, the art space is positioned within landscapes of narratives, which temporalize space within social and linguistic frameworks. Lamelas’s film A Study of Relationships between Inner and Outer Space is a constant investigation and negotiation between interior and exterior, always operating on both sides of the divide, never placing itself wholly outside it. García Torres’s Letter to Dr. Atl is a one-way letter exchange with a dead artist, “discussing” with him the implications of installing a Guggenheim Museum somewhere in the unspoiled Mexican landscape. García Torres’s work is about imagining a space in which something may (also retrospectively) or may not have happened; he creates a potential scenario/frame in which events become possible, thus visible, thus negotiable.

In Amar Kanwar’s video installation in the project gallery, the gendered (private) space of violence becomes a “space of public appearance” (Hannah Arendt), as a group of women disrobe in a public protest and lastingly alter the symbolic realm of social representation. Kanwar illustrates the process that leads from the embodiment of traditional roles and assigned scripts as wives, mothers, and victims to the emergence of transformative subjects in spite of the threat posed by acts of public protest. The women succeeded not only in altering the perception of public space but also in inscribing their own stories into the spatial order.

The exhibition introduces and juxtaposes diverse ways of using, unfolding, or dealing with privacy/intimacy by contextualizing and addressing parameters such as specific times, sites, events, and topics, thereby retracing an open and fragmented history of the private/intimate and its multilayered shifts in recent artistic practice.
www.tba21.org