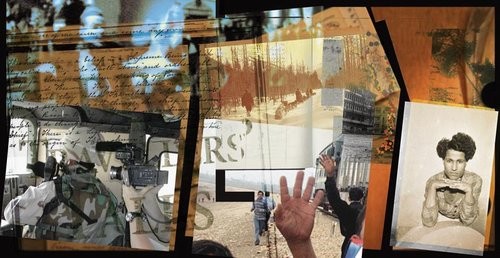 The title Shooting Back thus refers to the act of choosing to narrate one’s own history, the deployment of distinctive tools and methods of representation, and the reassertion of ownership over tradition and heritage. The expression is derived from ethnographic film productions of the 1960s and ensuing investigations. As artists, filmmakers, and theoreticians have developed new languages to talk about their traditions, heritage, and identities, they have in turn "shot back" at the crude, stereotypical, and fictitious imagery of their respective cultures presented by mainstream media and scholarship.

At the same time the expression "shooting back" marks the shift from passive forms of representation to new modes of self-representation. On an artistic level this has been addressed through the conscious investigation of overlooked, erased, and precarious histories. In order to approach such “elusive” realities, artists deploy strategies of reconstruction, archiving, and (performative) actualization and often access an immaterial heritage that is committed to forms of knowledge and culture that are already inscribed into history. The exhibition, divided into five loosely structured thematic sections and accompanied by a film program, is dedicated to hinting at these complex discourses.

SONGS / STORYTELLING
Amar Kanwar’s film A Night of Prophecy was shot in several regions of India and captures songs and poems (of protest and sorrow) that speak of the past, the severity of conflict and the cycles of change. In Seven Hungarian Ballads, filmmaker Želimir Žilnik features rural people in the Vojvodina region singing century-old ballads while doing their chores. Ice Floes of Franz Joseph Land re-creates sections of the novel Two Captains that forms the basis for the Russian musical North-East, which was being performed at the Moscow theater that was taken over by Chechen rebels in 2002. Given that the story has been interpreted as a Russian national epic, Catherine Sullivan questions to what extent it was a symbolic target. SONGS / STORYTELLING is devoted to the slower traditions of narrative, popular songs, and storytelling, which occupy the interstitial spaces of cultural transmission (oral history, interlocution).

FOLKLORE / HERITAGE
Anetta Mona Chisa and Lucia Tkáčová propose with their video Capital: magical recipes for love, happiness and health, new uses for a work with a precarious heritage and a controversial past, namely Das Kapital by Karl Marx. Ai Weiwei poses uncomfortable questions about authenticity and the relevant actualization of cultural values: Colored Vases consist of Neolithic pots being dipped by the artist into colored industrial paints. In Brad Kahlhamer’s work Billy Jack, Jr., the life of the artist seems to accidentally overlap with the story of the hero of the 1971 movie Billy Jack, who was committed to protecting Native Americans against discrimination. Theoretician Faye Ginsburg states that indigenous media-makers are often “people who are particularly engaged in the repositioning of cultural authority and experience by using satire, humor, and performance to provide multi-layered commentaries on their own identities and on the dominant society.” Ginsburg’s observation seems particularly relevant to Kahlhamer’s paintings (but also to Chisa and Tkáčová), in which diversely coded references from popular culture meet.

MEMORY / MEMORIALIZATION
"Collective memory" is sometimes accessed only through expressions that are considered to be part of a culture’s intangible heritage, as in Tanya Hamilton’s archival and filmic work about the history of Jamaica’s Mobile Cinema Unit. In the photographic work Triangle, Sanja Iveković documents and recalls how an explicitly private act can be interpreted as a threat to the public in an area tightly controlled by a state regime. The installation The KD Vyas Correspondence Vol. 1 by Raqs Media Collective consists of 18 video “enigmas”, based on the 18 cantos of the Mahabharata, one of the most important mythological texts of Hinduism. The artists’ collective explores issues concerning the production and transmission of narratives as well as vexing questions of demonstrability.

TRADITION / RITUAL / PERFORMANCE
As part of a strategy to undermine the single auctorial voice of a producer, one who often comes from outside the culture being examined, artists have literally handed over the camera to the people they are supposed to be filming, bringing in the gaze “from the other side” and questioning the relationship between the investigating subject and the object of investigation. The ongoing process of appropriation and re-appropriation and the remix of attributes of self-definition reinstate a conception of heritage and identity that is either fragmented or infinitely additive and that is actualized in acts and rituals of performance. Kutlug Ataman and Chen Chieh-Jen make use of the performative medium to stage acts and rituals and thereby expose viewers to more nuanced notions of cultural identity. In Turkish Delight, Ataman turns the camera on himself. Dressed as a traditional belly dancer, he performs the character of a belly dancer but also presents himself as a “Turkish artist”. In Lingchi: Echoes of a Historical Photograph, Chen restages a type of public execution performed in late Qing dynasty in China that became known in the Western world mainly through a famous essay by Georges Bataille. Whereas Bataille analyzed the photograph in the context of religion, eroticism, and aesthetics, the artist describes the actual taking of the picture and the ensuing theoretical oversubscription as acts of colonial appropriation. The traditional teaching system of debating used in Tibetan Buddhism is based upon linguistic processes and rituals, which filmmakers Ritu Sarin and Tenzing Sonam are trying to introduce to a broader public through their work. In a project that combines documentation with social initiative, Kristina Leko points out that one of the side effects of globalization is the assimilation of distinctive cultural practices and traditions while simultaneously calling upon viewers to take action against the disappearance of the Zagreb milkmaids.

HISTORY / RECOLLECTION
In 1996 Akram Zaatari, Walid Raad, and other artists founded the Arab Image Foundation in Beirut. It is committed to preserving, indexing, and studying photographic collections that document histories of the Arab world. The artists are concerned not only with research and the retracing of alternative histories but also with the modes in which different dominant narratives are passed on. Authenticity, date, and ownership are always subject to question in the archives of Raad and The Atlas Group. In Let’s Be Honest. The Weather Helped, Raad “assembled” the bullet holes left by color-coded cartridges used by the various militias and armies fighting the Lebanese wars. The color-coding system is employed by manufacturers in different countries to mark their ordnances and shells. In Woman to Go, Mathilde ter Heijne has collected hundreds of photographs and biographies of women from cultures throughout the world in order to reveal their remarkable stories and achievements and to question their historical anonymity. In the video Casio, Seiko, Sheraton, Toyota, Mars, Sean Snyder looks at how restricted or arbitrary access to the means of (media) production raises the question of who is included in the process of meaning production. Simultaneously he is questioning the representability of reality in the context of constant global cultural exchange via the media.
www.tba21.org