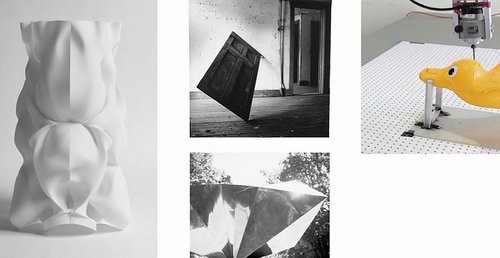 In past years Thyssen-Bornemisza Art Contemporary has acquired architectural objects as part of its collection of contemporary art, but more importantly it has also produced and supported full-scale architectural projects within the experimental parameters and settings of art-related productions. In the context of projects such as The Morning Line by aranda/lasch and Matthew Ritchie, Your black horizon Art Pavilion by David Adjaye and Olafur Eliasson, or R&Sie(n)’s concept for thegardenofearthlydelights, “architecture” has shifted from its proper place of production and reception, as well as from its status as heteronomous object. This conceptual shift not only represents an effect specific to the art context but also retraces the processes and production logics of a contemporary “visual industry” that penetrates and interweaves all aspects of today’s cultural production. Within this medial setting—which folds together production, distribution, and consumption— architectural objects have become figures of display and exchange value, as well as protagonists in the scenario of aesthetic experience. Having assumed a market-oriented and institutional status, they circulate within the economy of art-world discourse.
Transitory Objects takes up these experimental conditions of shifting disciplinary ground and their instrumental effects. It critically engages with an understanding of aesthetic experience often claimed as a dynamics of ambiguity, contingency, and uncertainty in order to draw a conflictual space that both connects and separates the architectural project and the artwork. Displaying architectural objects within the framework of selected artworks from T-B A21's collection introduces the problem of contextuality. A parallel reading of artistic and architectural production today opens up the question of what kind of impact this transfer has on the status of the architectural object as well as on the nature of the “aesthetic realm” itself. Setting aside an idealistic understanding of the aesthetic realm as an autonomous field, we would instead characterize it as a privileged site of sign and value production within the context of today’s knowledge industries. This privileged status reveals hierarchical structures within the art world as well as its position within society’s “symbolic order.” Clearly art’s privileged status in society is tied to the artwork or aesthetic object itself, to its promise to surpass social constraints and divisions, to speak to the human soul, to transcend instrumental reason, and by virtue of this, to possess value that persists through time.

If we propose to look at architectural objects outside the context of their production, to place them in the field of aesthetics, we do not suggest an arbitrary reading. Instead we want to understand their specific mode of production and consider their potentiality of meaning within the sociopolitical conditions under which subjectivity is “produced.”

The specific architectural objects are derived from design practices—exemplified by the work of Alisa Andraschek biothing, Hernan Diaz Alonso Xefirotarch, Greg Lynn FORM, Neri Oxman MATERIALECOLOGY, Aranda\Lasch and R&Sie(n)—that utilize the performative powers of algorithms and advanced geometry. They are products of a realization/materialization of information by generating, modulating, and executing sets of rules and protocols. Their formal languages show an affinity for exuberance, flexibility, and efficiency—the productivity of life in general—which links them to the notion of potentiality. It is a question not only of how design as concept is radically changed through the impact of tools known as "generative algorithms" but also of how to investigate the conceptual foundations of these practices. It is important to trace these conceptual foundations as they have an operational value for these architectural practices and also to link them to current discussions about contemporary operations of power, particularly the discourse surrounding biopolitics. This perspective draws a trajectory of politics that reaches from a micro level of software-aided production of forms to a macro level of governmental techniques of "making life productive" as a contemporary form of subjectivization.
www.tba21.org