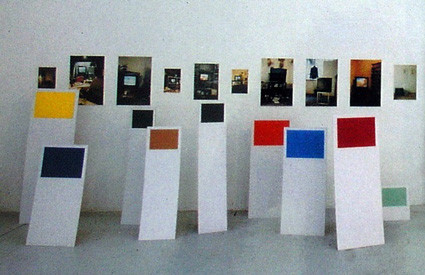 Phantoms - those unreal products of an imagination that appear real and a reality that in turn seems fantastic - are more than vengeful spirits that promenade through diverse literary and cinematic stories. They frequently assume another exemplary role: phantoms are surrogates for the refraction or disruption and disturbance of a solidified, self-satisfied story, image, form or a whole system. The idea for the "Paraphantoms" exhibition derives from the observation that an increasing number of contemporary artists and filmmakers are currently dealing directly, experimentally and provocatively with phantom-like fractures of content, materiality and structure in moving and static images. Structuralist film pioneers experimented on the fragmentation of image and text/sound in the mid nineteen sixties while video artists of the nineteen seventies and eighties sixties worked on the expansion, compression and reversal of picture fields. With this knowledge of the phantoms of the past - demonstrated by the filmic and photographic installative contributions by Ed Atkins (*1982, UK), Trisha Baga (*1985, USA), Amy Granat (*1976, USA), Corin Sworn (*1977, UK) / Charlotte Prodger (*1974, UK) and Joseph Zehrer (*1954, D) - the structural dissolution is being carried out even more excessively today to the extent that phantoms themselves become components of the image.

In her work, London-born artist Corin Sworn (*1977, lives between Glasgow and Vancouver) deals with the substantial question of subjective experience and in how it is woven into social trends and cultural codes and becomes translated into history. Her drawings, installations and videos are full of references to literature, theory and film that particularly look back into the past. They refer to big events such as the spectacular world exhibitions in the late 19th century, or to experimental schooling developed by the progressive education movement and the anti-authoritarian education of someone like A.S. Neill. Furthermore, her works show a special preference for Hollywood movies with a dramatic ending, whether it be Jonathan Kaplan’s suburban drama "Over the Edge" (1979) about disillusioned teenagers, serving as reference for her film "After School Special" (2009), or recordings of "Harry Potter" blockbuster movies that can be recovered in her collaborative work "HDHB", exhibited in the show. Rather than fetishizing these references as nostalgic or utopian, Corin Sworn seeks to investigate how each of these moments in time opens up new spaces for imagination, action and impulses for each individual. In search for sources of tradition, she encounters significant arguments for the everlasting social power of art production. The talk will be in English and is part of the current "Paraphantoms" exhibition.
www.temporarygallery.org/