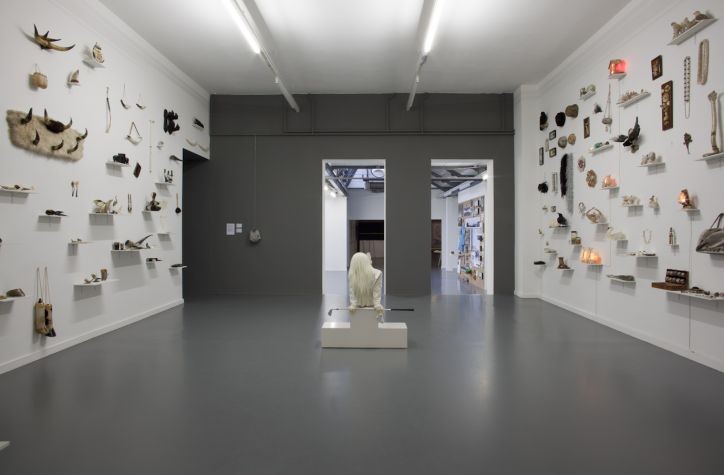 The Rotterdam artists Silvia B., Esther Kokmeijer, Ewoud van Rijn, and Lidwien van de Ven have been nominated for the 2014 Dolf Henkes Prize. The Dolf Henkes Award is awarded every two years to an iconic artist from Rotterdam. The jury, headed by collector Joop van Caldenborgh, nominated the artists for the €12,000 prize. The exhibition of the nominees takes place at TENT from Thursday 27 November 2014 until 18 January 2015. On 25 December Lidwien van de Ven was awarded with the Dolf Henkes Prijs 2014.

In a new lifelike sculpture by Silvia B. (1963), a lonesome individual hangs around the exhibition space. The figure, its anthropomorphic shape, and pose, flow together in a manner suggestive of a surrealist object. A wall-sized installation with a plethora of curious animal paraphernalia from the artist’s personal collection forms the context for two sculptures. The figures and curios inhabit an aesthetically ambiguous world in which civilisation and instinct, emotion and horror, all compete for priority. Silvia B. has exhibited at Museum Beelden Aan Zee and GEM in The Hague, Museum Boijmans Van Beuningen, Kunsthal Rotterdam, Kiasma in Helsinki, and La Halle Saint Pierre in Paris.

In TENT's central hall, Esther Kokmeijer (1977) reports from her travels, outlining her thoughts, research, and ideas in the form of photographic series, videos, maps, and diary accounts. She will premiere a new work, Sheep. In a series of photos and text, a personal travelogue – with universal implications – unfolds around her journey, in the company of a sheep, from China to the Land Art Biennial in Mongolia. In a work with the artist Simon Kentgens, an installation documents their attempts to connect with each other from North and South Korea. The duo travelled to meet each other on the border of the two countries, but never met.

Ewoud van Rijn (1967) transforms the exhibition space into a place for rituals and meetings. Its focus is a sculpture: partly an architectural folly, partly a space for physical and mental exercise. At the invitation of the artist, interviews, performances, and exercises shall take place, the results of which will not always be visible. Using text, drawings, sculpture, and performance, Van Rijn overlaps art and esoteric ideas to explore a new and meaningful positioning of the artist. Van Rijn’s work is included in private and museum collections in Europe and the United States.

Lidwien van de Ven’s (1963)photographs focus on hidden facets of major political events. Her works show external elements of news pictures, drawing attention to ignored nuances or unusual details. To do this, she travels a great deal in Europe and the Middle East, often following the same path as journalists, wile exploring questions of representation and the operations of image perception. The landscape that she photographs is never just a landscape; it has both an ethical and an aesthetic dimension. Her work has been shown extensively in major international art centres, including Kunsthalle Fridericianum at Documenta 12 (2007).
Lidwien van de Ven won the Dolf Henkes Prijs 2014.

Dolf Henkes Award
At the bequest of the Rotterdam artist Dolf Henkes (1903-1989), the prize is intended to reward artists who are as iconic to the city of Rotterdam as the award’s namesake. Since 2004, at the initiative of Henkes Foundation, the Dolf Henkes Prize is presented to artists who put art in Rotterdam on the map. Previous winners are Jeroen Eisinga, Erik van Lieshout, Melvin Moti, Lara Almarcegui, and Gyz La Rivière; all respected and internationally positioned artists.

The Dolf Henkes Award is an initiative of the Henkes Foundation. The foundation’s mission is to enable a favourable climate for art in Rotterdam.

The Dolf Henkes Award 2014 is supported by the Henkes Foundation, the Cultural Heritage Agency of the Netherlands, the Centre for Visual Arts Rotterdam, and Foundation Bevordering van Volkskracht.
www.tentrotterdam.nl