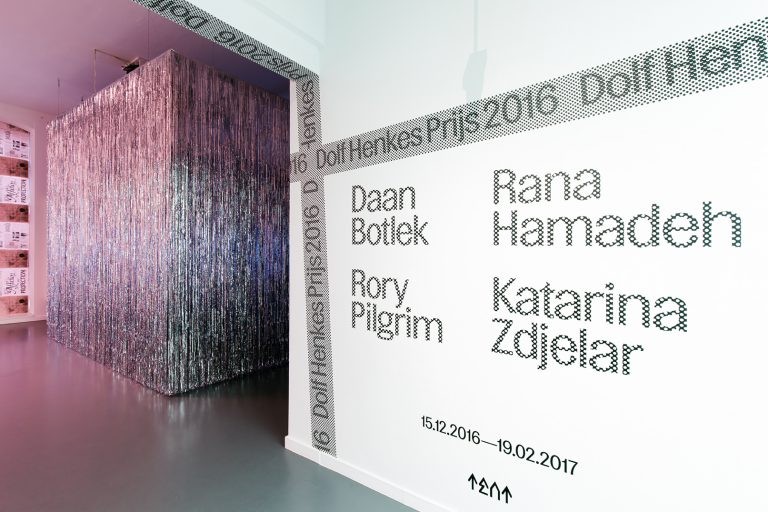 The artists Daan Botlek, Rana Hamadeh, Rory Pilgrim and Katarina Zdjelar have been nominated for the Dolf Henkes Award 2016. This biennial award is granted by the Henkes Foundation to an iconic Rotterdam artist. The jury, under guidance of collector Alexander Ramselaar, has nominated the four artists who stand the chance of winning a sum of 12,000 Euro. From Thursday 15 December 2016 until 19 February 2017, the exhibition with the works of the nominees will take place in TENT. During Art Rotterdam, on Thursday 9 February, the winner will be announced.

At the request of the Rotterdam artist Dolf Henkes (1903-1989), a part of his estate has been allocated to this stimulation award for artists who are just as iconic for the city of Rotterdam as the name giver himself used to be. At the initiative of the Henkes Foundation, the Dolf Henkes Award has been granted since 2004 to visual artists who give weight to the Rotterdam art. Previous award winners were Jeroen Eisinga, Erik van Lieshout, Melvin Moti, Lara Almarcegui, Gyz La Rivière and Lidwien van de Ven: all of them well respected and internationally orientated artists.

“Daan Botlek is an artist who has proved to be able, over the past ten years and off the beaten track of the art world, to develop a completely individual oeuvre and has thus managed to establish strong ties with a large worldwide audience. From a half page drawing in a book to a towering wall painting in India, he gives an account of a universe in which human figures play with the rules of geometry and the laws of physics.”
Daan Botlek (1977, Vlaardingen) studied Illustration at the Willem de Kooning Academy in Rotterdam. He is well-known for his huge wall paintings in both Rotterdam and abroad, in cities such as Leipzig and Bangkok. In addition, he frequently works on illustration assignments for Wired, Nike and others.

“In the work of Rory Pilgrim, social involvement and communication form centre stage. For his projects, he works in close cooperation with a variety of people, both professionals and amateurs, children and elderly, locally and internationally. By entering into these forms of cooperation, Pilgrim creates a platform for dialogues with his work, an environment in which the participants can openly express themselves. He translates these meetings and conversations into his works on paper, posters with texts, video works, compositions and performances.”
Rory Pilgrim (1988, Bristol, Great Brittan) studied at the Chelsea College of Art & Design in London and at De Ateliers in Amsterdam. Recently, he exhibited in Flat Time House in London and at the 5th Ghuangzhou Triennial. In Rotterdam, the work of Pilgrim was on show at the Witte de With Center for Contemporary Art, as the winner of the C.o.C.A. Commission in 2014, and last summer during Project Rotterdam at the Museum Boijmans Van Beuningen.

Within her artistic practice, Rana Hamadeh draws on a curatorial approach to develop long-term discursive projects that lead her audience through the infrastructures of justice, militarism, histories of sanitation and theatre. Her body of work stems from an extended investigation into specific concepts and terms, treating the field of theory as fiction. Spanning performances, cartographic works, sound and text-based stage-sets, as well as writing projects and conversations, her work unfolds as a network of associations and lines of flight that bring together a diversity of histories, geographies, philosophies and fictions. In 2011, she initiated her ongoing project, Alien Encounters, as an umbrella for a series of works that think through state-sponsored forms of violence and the legal apparatuses that enable them. Hamadeh graduated in 2009 from the Dutch Art Institute. Her solo shows include a.o. the IMA (Brisbane, 2016); The Showroom (London, 2016); Nottingham Contemporary (2015); Western Front (Vancouver, 2015); Gallery TPW (Tonoto, 2015) and Kiosk (Ghent, 2014).

“Katarina Zdjelar makes a deep impression with her oeuvre, in which themes such as identity, authority and community form centre stage. Using the individual as a starting point, she manages to lay bare social issues and changes in society in her videos, sound works and books. Language is an ever recurring element, which she applies in several layers and simultaneously. She builds up a consistent oeuvre, in which she remains committed to her principle, medium and themes in an often appealing, penetrating visual language. Her work does not disclose itself immediately: it challenges the observer to have a second look, give closer consideration and reflect.”
Katarina Zdjelar (1979, Belgrade, Serbia) studied Fine Art at the Piet Zwart Institute in Rotterdam. Her work has been shown at a.o. Venice Biennale, ICA London, MACBA Barcelona, Stedelijk Museum Buro Amsterdam, Museum Sztuki Lodz, Busan Biennale, Metropolitan Museum of Photography Tokyo and TENT Rotterdam.

The Dolf Henkes Award is an initiative of the Henkes Foundation. This foundation aims, among other things, to create a favourable artistic climate in Rotterdam.
The Dolf Henkes Award 2016 has in part been made possible thanks to the Henkes Foundation, Cultural Heritage Agency of the Netherlands, Stichting Bevordering van Volkskracht, G.Ph.Verhagen Foundation, STOER and Powerhouse Company.
www.tentrotterdam.nl