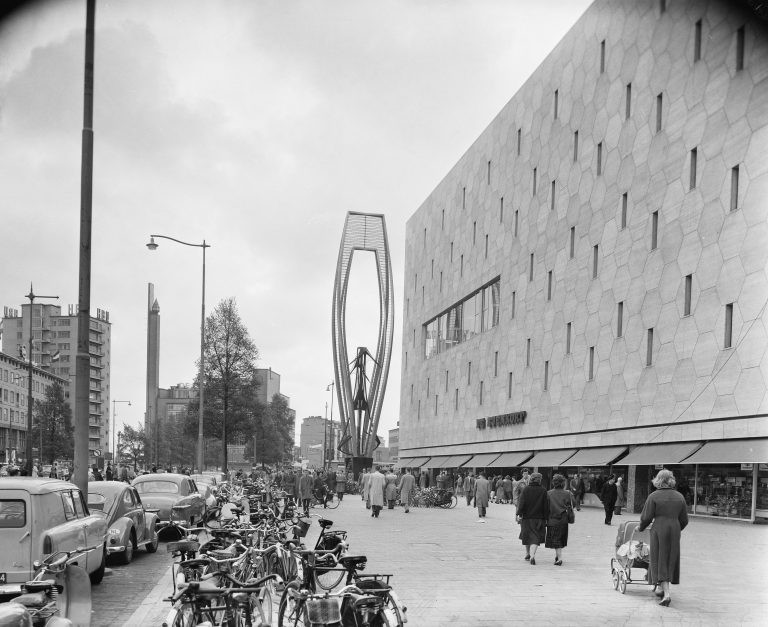 The untitled sculpture by Russian-American artist Naum Gabo (1890 – 1977) on the Coolsingel in Rotterdam is his largest constructivist artwork ever placed in a public space. At the time, ‘the thing’ or ‘the stylized flower’ as the 26 meter high, 40.000 kg work has come to be known, was a symbol of modernity.

In 2011, the Bijenkorf building and the artwork were declared national monuments of the post-war reconstruction period. In recent years, the sculpture has deteriorated and will be restored in 2017, alongside the long expected redevelopment of the Coolsingel. With the reclamation of public space in this nerve-center of the city it is hoped that Gabo’s sculpture will reclaim its rightful place as a landmark. In anticipation of this restoration, Rotterdam Cultural Histories #10 provides a history of the sculpture through preliminary drafts, film footage of the unveiling and documentation of various restorations that have occurred over the years.

The work was initially commissioned by Van der Wal, director of Bijenkorf department store, aided by Nelly van Doesburg, widow of Theo van Doesburg and an expert in abstract modern art. It was placed in front of Bijenkorf in 1957, itself an iconic building designed by Marcel Breuer.