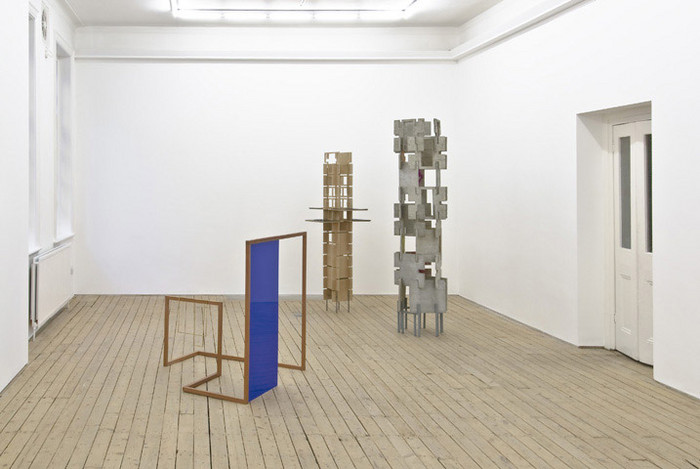 Feeling gave way to structure brings together three London based artists who transform the existing vernacular of the city environment in which they live and work into visual languages of their own. All three artists share an interest in the patterns and structures that can be formed in these liminal sculptural spaces.

Florian Roithmayr’s work is often based on the geometries of man-made traditions and can be seen as an attempted blueprint of the environment he finds himself in. Initial starting points for Roithmayr’s research are a hybrid of different references: architectural or spatial arrangements, history or cave paintings, museum displays and their correlation in popular culture. Most of his work takes the form of structures and display elements that suggest a function of support or frame for stencils, cutouts or casts. Recent works Cave and Shelves are formally based on the Eames office design of the children’s game The House of Cards. Both structures that he creates have become contained environments that are impossible for an individual to enter into. Roithmayr questions what happens to shifts of self-identification and understanding once they enter the domain of pragmatisms like spatial arrangements and architecture. Yet the handprint remains, stamped on to the surface of Cave, suggesting a primal relation to space and mark-making that echoes the Eames’ optimism for a human relation to architecture and design.

Giles Round combines formal sculptures, lights, monochromatic planes, posters and video animations with texts that are compromised of his own uniquely designed fonts. Installations become stage sets into which relationships between constituent parts allude to the potentiality of narratives. For this show he has made sculptures that are drawn from his observations of the way visual equivalents of alphabetical letters appear in the environment around him. A shop display takes the shape of an L, a bike stand becomes an M. These text forms are the starting points from which he transforms the structure of the letter once more into abstract sculptures that create their own visual logic within layers of cultural reference. Text, geometry and structure come together and create slippages in meaning.
www.theapproach.co.uk