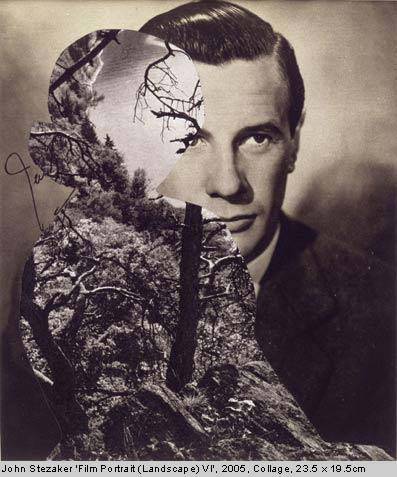 'Cut' brings together four artists that use collage as an integral part of their practice. Rather than acting as a survey of the vast importance of collage over the 20th Century, 'Cut' sets out to evoke the spirit of surrealists' collage, embracing Andre Bretons' definition of Surrealism as a disruptive "juxtaposition of two more or less disparate realities".

Since the 1950's Bruce Conner has been an important figure in the American art world. Collage is only one part of his practice, which also includes sculpture, film, inkblot drawings, printmaking and 'events'. The small collages on show here are typical of Conner's work that is influenced by the surrealist collages of Max Ernst. Old wood engravings from the late 19th century are cut, shifted and configured to present new and mysterious landscapes and psychological dramas.

Cris Brodahl's paintings start as an amalgamation of images derived from many different sources and then transcribed onto canvas in a photo realistic style. Figures become cut and distorted making up strange third bodies. Colour is replaced by sepia tones and a sense of place is removed.

John Stezaker's contribution to the medium of collage in Britain since the 1970's is unrivalled. Since turning his back on a conceptual practice and embracing the image, Stezaker has gone on to make subtle but extraordinary collages using 1950's film stills, Hollywood film-star annuals, illustrated encyclopaedias and postcards. Each unique work contains a fascination with how two or three combined images can be aligned to make an often dark and disturbing 'third' image. Here, Stezaker presents seven new works that combine a re-occurring female silhouette with photographic portraits that blend in with woodland or urban landscapes.

The figures in Martin Westwood's paper cut out works are derived from in-house business catalogues, insurance brochures, travel magazines, corporate prospectus and virtually any printed matter where a perfect world is illustrated and sold. These images are re-drawn and transformed into cut-outs and stencils that are pinned together within thick frames. The concealed environments combine recognisably mundane work scenes with dreamlike moments of escapism, romance and freedom.

Cris Brodahl lives and works in Ghent, Belgium. She has previously shown at Marc Foxx, Los Angeles (2004). A solo show at The Approach is planned for 2006.

The Gallery is open Wednesday - Sunday, 12 - 6pm or by appointment For further information and images please contact Vanessa Carlos at The Approach
www.theapproach.co.uk